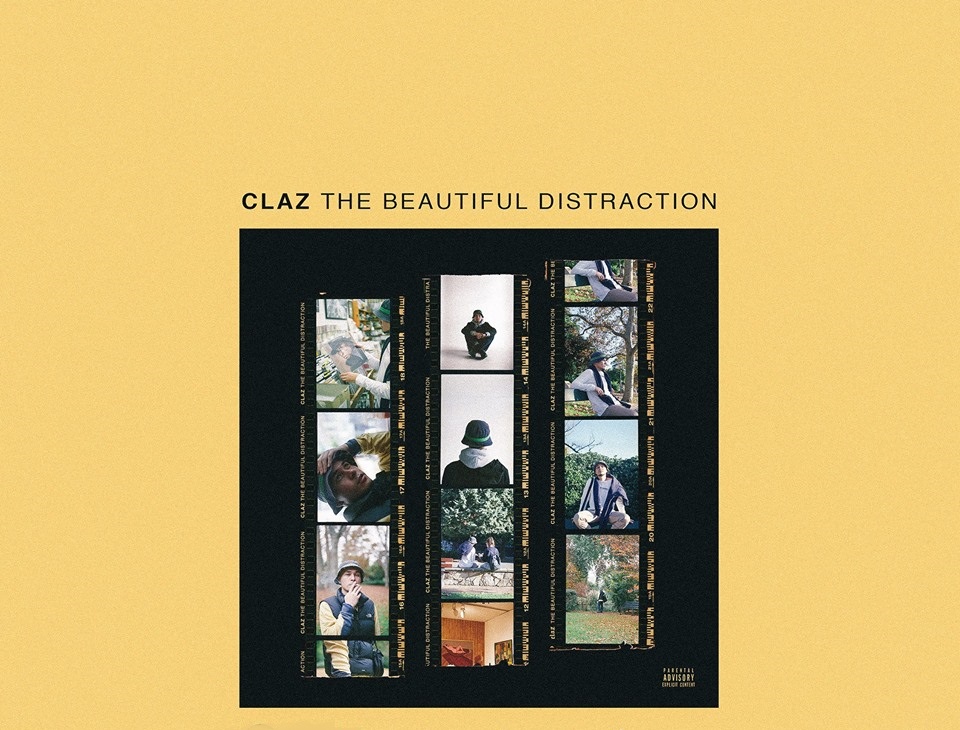 June 14th saw the release of “The Beautiful Distraction,” the debut L.P from Adelaide’s own Claz. It’s the third release from the ill young talent, having previously released “Living In The Meantime E.P” and 2016’s extremely well received “7th Floor Blues” mixtape.
“The Beautiful Distraction” is Claz’s finest and most professional work to date, no surprise Hau has picked it up as a feature album on JJJ.

Claz has an original voice that characterizes his signature delivery. Super relaxed, silky smooth tones with mad panache. He could literally say anything on a track and it would sound fresh. “Easy on the ears, hard on the brain,” pretty much sums his style up. Even though he has one of those gifted voices, he shares himself, his thoughts about life, politics, so whilst being pleasing to the ear, it’s relatable and stimulates the brain. Claz has the ability to be supremely successful commercially, so it’s refreshing to hear he is bridging the gap between that “sound” but with integrity, relevant lyrics, and dope flows (which, to add to an already convoluted & overly opinionated sentence, is what the scene needs.)

Most of the beats are really slow, either low-fi, ultra-swing boom bap, or analogy-sounding trap beats, which match Claz’s unperturbed style perfectly. It features a list of lesser-known producers (to me) but are good quality and match Claz perfectly. A couple of beats I wasn’t feeling, but one cannot deny that they were well-produced, and the incredible job Claz did with each track. His beat selection was perfect, as there was a different producer on every track, yet the album has a very cohesive feel, and synchronicity.

As music is intensely vibrational, diverse and layered, the author of the article can only find meagre accolades in comparison to what you can get from each album he reviews, so the main argument I have for this release is: just go and listen to it, support independent artists walking in their own lane with skill. “The Beautiful Distraction,” from all of life’s stress, qualms and bullshit. Claz definitely seems like an artist that does this as a way of extracting his inner thoughts and expressing himself with intelligence, but has the musical sensibilities to make impressive tunes.

The album’s strongest attribute (many may disagree, fuck ya aha) is the mix/master by K21, and the tracking by Prospeks too. Claz is an incredible artist, and his voice is what makes the mix so good in the first place. What K21 has done with the project is incredible. Keeping the main vocals mostly dry of reverb in a lot of tracks, and utilising delay, particularly on the back-up vocals is what makes Claz sharp & crisp on this type of production. His use of saturation is perfect, his approach on each beat is different depending on the instrumental and what he does matches/builds on the track’s dynamics and structure. The master is boss, everything is crispy, warm and bassy. A lot more could be said about the strengths of this mixing/mastering, but to keep it short, young aspiring engineers, and experienced ones could take a lesson from this album and K.

Such a solid release, and an impressive effort by everyone who contributed to it. It isn’t Rap, or Hip-Hop, R ‘n B, or Soul for that matter. It simply is good music, but for anyone in doubt, Claz is a dope rapper, and great songwriter too. His multies’ are always on point, tight flow, impressive delivery and voice, relatable shit. Definitely an album to roll up at 4:20 ya’ll.