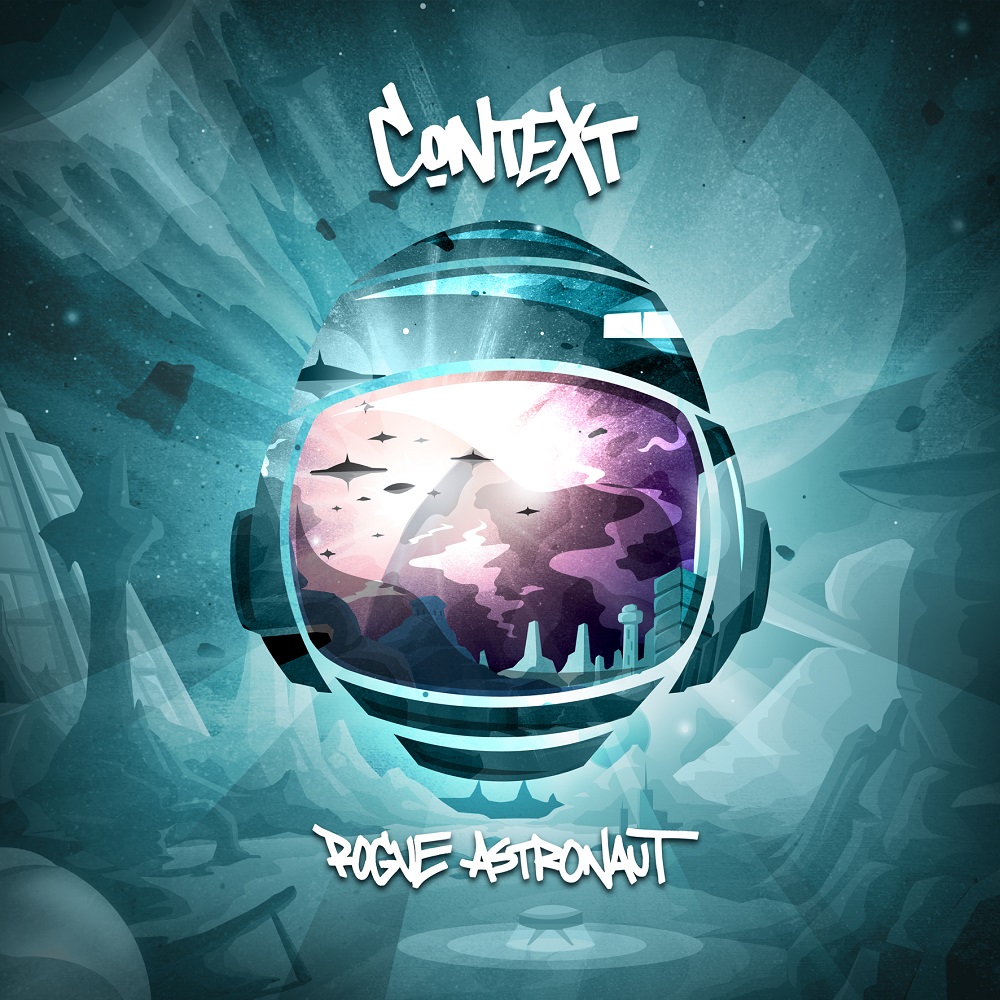 Boom bap. It’s a phrase used loosely in this astrological age. Context & Jimmy Flipshyt are names synonymous with the genre. Transmitting their dusty frequencies through the stratosphere for what a mere mortal may perceive as thousands of Earth days, it’s fair to say they have been making noise in Melbourne for quite some time now. A trio of quality Ep’s saw the duo gain rotation on Triple J and supports for touring acts (R.A. The Rugged Man, High Focus Records, P.Smurf, Dialectrix etc)

This release is quality. Full Stop. That’s my review done. One would only be gushing to find adjectives appropriate for this. Rogue Astronaut is classic, purist Hip-Hop. Under the guise of Joe Syzlak, the release is primarily produced by Context, heavy mid 90’s vibes permeating the whole release. Obviously refined, the production skill is top notch, the drums tight, punchy and dusty. With the addition of a beat each from Boxtrumental & Jimmy Flipshyt this is an exquisitely crafted record. To speak on the vocals could only be a meagre attempt to accolade what can only be described as a story. You have to listen to it front to back with all the art and you can see what the “rapper” aka author is doing. With tight, multi-syllable, pocket flows Context labourlessly (I just made that word up) sweeps over the beats with his coarse, warm and nasally tones. His style comparatively simlar to Leaf Dog (High Focus) and Dandenong heavyweight Never Settle

I’ll start from the start of the album but conceptually you could view this project in a different order. I’ll get into that later.

Vinyl crackle, dusty sample, transmitter frequencies, tight swing drums, launching into the sky, this track starts on some intergalactic space writer shit. Context’s flow on this is so dope, some of his best on the release. Buick finishes the track off right with chirps and tight space noise cuts. A great way to kick off the album, it sounds like ya roll a little something to get warmed up if ya know what I mean. Chill back, expand and enjoy the journey.

This track is produced by Boxtrumental. Bangin’ beat, the saloon style piano and horns have that “big” boom bap sound. The track essentially entails the thoughts of a jaded arsehole haha. It is the purist mind state, Context is letting you know all the things that piss him off. Sarcastic and humorous this tracks is flowy and enjoyable. Clever track placement.

Back to Joe Syzlak production. Classic 90’s style samples. Real nice choice and taste in sounds for the production. Vocals are real dry and raspy, combine that with the rapid fire delivery and fresh mix-down, this track is well polished, with a dusty sound. Cuts by Jimmy Flipshyt are killer, wicked selection of vocal samples. This tracks a bit of fun.

Ill interlude, one of the best beats on the album. The samples give it a Honeymoon On Mars feel.

One of those beats that Kool G Rap would sound good on. Not to detract from Context. This one is chilled out and somewhat of a narrative. Sick instrumental from Jimmy Flipshyt, the gel with the beat and vocals is nice. The Canberra landed, Melbourne residing rapper is his most melodic on this one, nice to hear a bigger range from him. At this point in the first listen as a listener you know this release is quality. Context is a talented rapper with a unique voice and style.

As suggested in the intro, you could listen to this ep in a different way. These last two tracks have conceptual film clips on Youtube so you could essentially watch “The Landing” then “Route 11” then play the ep from the start (that being said you could check it out in any order, the album is so cohesive). These clips are cinematic and explain the “Rogue Astronaut” theme.

Context conceptualized the ideas for it and teamed up with Dayne Edward to produce what are two amazing clips.

As for this track, it’s the standout track of the release to me. My favourite beat, so moody dark, clean and dirty. Head nodding flow, clear concise delivery. Beat change up about a minute or so into the track keeps you on your toes and only deepens the heart thudding connection to the instrumental. Buick holds down the cuts, an awesome way to finish the track.

This is an excellent clip, it is exciting, weird and sets the tone for the whole release (the author could have a whole separate review for the clip itself.) Fat, punchy, live drums and nice sample. Strung out rhythmic flows, solid tone delivery, this is one of Context’s best performances. The cuts entail “Smooth Crash Landing” from Fliptrix (if not already familiar with that album, one doesn’t appreciate the significance of that particular theme) Great selection from Jimmy Flipshyt, very tasteful. The extra sample at the end and studio snippets close the album perfectly.

After a few rotates, this Ep grows on you immensely. It has a variety of different styles and textures, not too much of this, not too much of that. At first it seems like the vocals need a bit more air in the mix but after a few listens you realize the mix is in that perfect pocket, not too loud, not too quiet. The master by L-Rox at Redsecta is dope, the whole thing bangs. Overall this is a solid release worthy of astronomical praise, limited to cassette and digital, it’s a cult conceptual release. Not many people do that sort of stuff anymore.