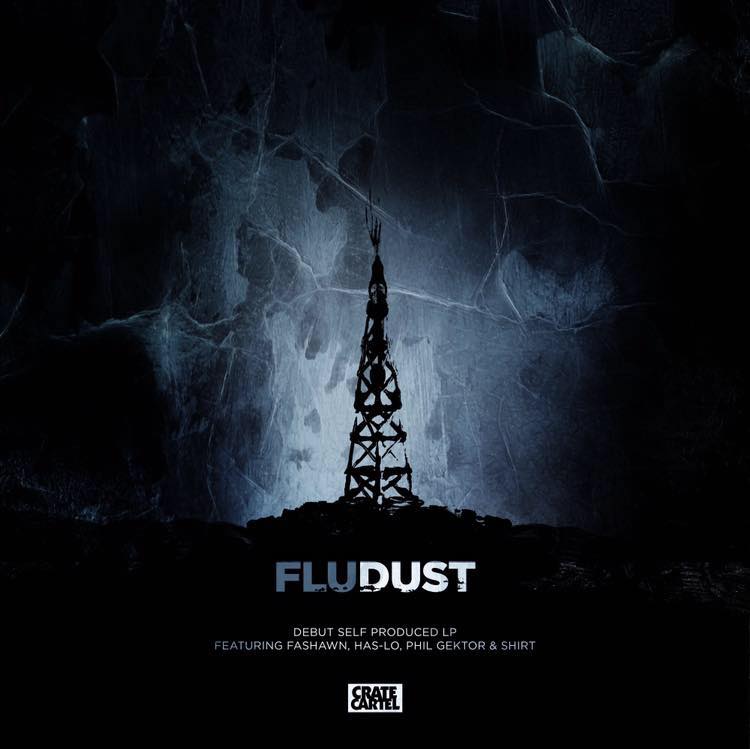 Starting this review has caused much trepidation, mainly due to the multifaceted and complex nature of the writing displayed within this LP, it’s as though somehow I want the review’s intricacy to reflect how crazy Flu’s writing is, but alas, the music speaks for itself, and nothing I write does this album justice.

The return of your favourite anti-hero, Flu, delivers his finest work to date. The acclaimed genius, is considered by many to be one of the best emcees in the country, so it should disquiet many that he has once again levelled up, taking his signature elaborate styles to a level we’ve yet to see in full form. The latest release is as unsafe as it is enjoyable to listen to. Entirely self-produced by Flu and mixed by Crate Cartel member Phil Gektor, it’s an incredible solo effort on Flu’s behalf. It is also a reflection of how good Phil is getting on his mixing work as well, he does a phenomenal job.

Dust is a chessboard, each beat the opposing player, every line a significant move of each piece. Every piece of imagery and content puts you in check and before you’ve thought of an escape route, he has once again put you under check once again. The level of lyricism is hard to describe. It’s layered, sarcastic, cavernous, original and super poignant. Double entendres, double meanings, heavy metaphors and innuendo all twist the brain into a pretzel knot, making each line sink in subconsciously before the conscious mind can comprehend the layers to each line.

Dark, moody, atmospheric and dusty describe the album’s soundscape. Some tracks hit you hard in the mental, some hit you hard in the heart, others are hype stomping tracks. If you purchase this album in hopes of a “feel good”, positive, party record, then you will be seriously disappointed. If you’re after an album, with depth, production value, reflective songs, dark, complex themes, incredible finesse and unfathomable lyricism, you will be unassumingly impressed. The ambiguity of some lines are brilliant. The best example of this complexity, treacherous style is the track “Pay Dirt” where he blisters through some incredible lines, over a heavy slow banger.

The only thing I can find wrong with this release is that its only 10 tracks deep. However, the quality of the tracks just leave you scratching that itch that he leaves you with, needing the next fix.

The album has some impressive features including Fashawn, Has-Lo, Phil Gektor & Shirt, and they all bring their weight to each track. Flu is a super heavyweight on each track including the features, but the tracks that pertain to me the most are the ones when he is rocking solo. Songs such as Anti-Hero, Kerkovian, Pay Dirt & Operation: DUSTLAUD are stand outs for me, with Flu flexing his superior styles & panache over each self-produced masterpiece. The one stand out track to me that just hits the chills, Phantom Cloak is inconceivably relatable. Too many great lyrics to quote, but every line is well-crafted and is delivered from a perspective of wisdom and solemness. The beat is understanding and wraps you up in its unassuming arms. In a cookie cutter world, this song is unapologetically swimming against the current. Having a code over all the bullshit basically.

Flu has not released much previous production work, but this album is extremely well crafted, abstract and original. This album is a breath of fresh air, and stands alone as one of the best self-produced and rapped albums to drop in recent years. It has to be in the top 3 releases of 2017, and if you disagree, you need to listen to music more intently.

Disclaimer: this article was written in awe and appreciation of the craft of emceeing displayed, and in no way is trying to “sell” this album to the reader. It meekly tries to give it the respect it truly deserves, and has been an article that has taken months to write.