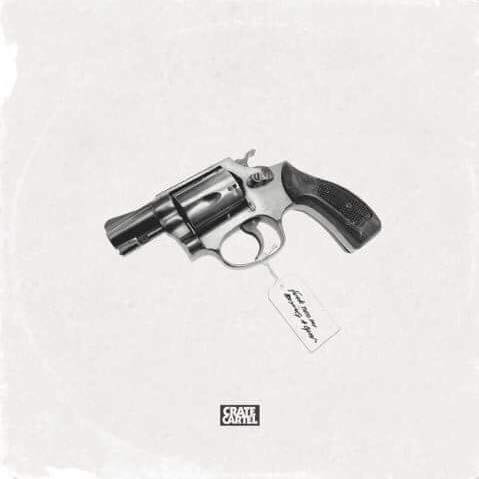 F#ck This I’m Buying A Gun

This film/album is monumental. Full stop. If the writer of this article attempted to foolishly describe this release in full detail, then he would be a beardly man with many a forgotten dream.

FTIBAG is so layered, textured and brilliant. It is the sort of film that surreptitiously works on all of your senses. In many ways the beauty lies in the simplicity of it. In many others the complexity, attention to detail and brain power behind the project is breathtaking and is the cornerstone of what make this so damn good.

I mean fucking hell. You would be a very sour, blind, deaf and heartless person to not realise the craftmanship that was put into this project, even if you didn’t like Hip-Hop, or even if you had no musical sensibilities. This is pure art, the type of thing many of us live and breathe for, the type of thing that does move mountains, and has a positive impact on the world around us.

As afore mentioned, the dexterity and abyss-like depth to this release has made it difficult to decide where or how to start describing this masterpiece. So basically I'm going to break a few elements down and focus on what each of these talented beings have brought to the table. I'ma start with the star of the show - Flu:

Highly and undeniably underrated, the man, Flu aka Fluent Form has been a top tier rapper for a long time. From Chapters Of Substance all the way through to Flu Season and everything in between, one can see the journey of progression this MC has taken. FTIBAG sees Flu step arguably into the prime of his career. Littered with brilliance, multi-syllabic flows, metaphors, layered thoughts and a storyline that only too well describes the struggle of an Australian Hip-Hop artist, he is so on point with this one. Musically he has found the balance of tone, lyrics and delivery to the point where you see every dope stage of his progression all rolled into some Super Flu Sayian 4 or some shit. The content written is so close to his heart, you can feel the weight in the things that are being said, you feel the emotion and you identify this within yourself. It is the unspoken anthem for the masses of independent artists out there, that struggle, that have perfected their craft but aren’t seeing the success that those with less craftmanship are getting. The artists that do struggle with the emotions, pressure and the stress that goes along with following your dreams. Even though I have upmost praise for his work on this, I still think Flu Season is his best rapping performance, hard to top though. The storyline is conceptually well-written, and is quite easy to follow even without the video to go with it.

Phil Gektor:
Entirely composed by Crate Cartel chief Geko, FTIBAG is some of his best work. Elements of Crate Cartel, Crate Cartel Radio and his newer works all merge into one awesome soundscape. It’s definitely aimed towards more of a movie score than an album per say, but still holds its own as a Hip-Hop album. The dusty retro samples, interludes, crunchy drum breaks, abstract noises, all contribute to the ominous and foreboding musical landscape which compliments Flu and the theme of the release. The strongest connection I had with the beats is the familiarity of the production to the original Geko Crate Cartel album, and a similarity towards his production on Flu Season, ie Fan Mail. The sounds suit Flu so well and is meticulously crafted, so busy is some bits, sometimes stripped right back. The mix and master on the album is very well balanced between the retro, dusty vibe and a crisp clean new sound and has high sonic quality. Dark, moody and baroque, it’s a beautifully crafted album. Phil Gektor also makes a guest appearance on the album under the guise of the gun dealer, which helps break up the vocals at an important part in the music.

Discourse & Carl Alison
The strongest point of this release in my opinion is the filmography. I don’t really know much about the technical aspects of this work, but I do identify when something is of very high calibre. To which this film categorizes itself, painfully hard to think of anything that been done exactly like this in Australia, but it would be a fair opinion to say this some of the finest filmography to come out in the local scene. Discourse does an incredible job handling all the editing and filming the majority of it, no doubt countless hours spent. Known for his quality and body of work, this falls short of no expectation. Carl adds another dimension with his amazing drone and gimble shots, which intensifies the “movie” experience. The angles, locations, shots, lighting are all amazing. The shot techniques have been used perfectly, each “special” shot is used sparingly giving is a revived, refreshing feel. There’s heaps of amazing shots, but nothing is overused or played out. The synchronicity between the music and film is amazing, everything rolls perfectly into place and hits at the perfect time. I love the locations that have been used ala Grumpy’s, the streetscapes, the product placement (nice work Discourse haha.) The combination between Carl Alison & Discourse lends itself some powerful ramifications, pure art executed through visuals. So many things are communicated, not said, through the videography which I think is what makes it so awesome to watch, the attention to detail is phenomenal. Underqualified to “break down” the elements of video, the writer makes no claim in value of opinion on the matter, but quite simply put, this is brilliant. Just go and fucking watch it alright?

Before I conclude the review I would like to take the time to offer some critique/ other things I enjoyed in the album. I don’t think it would be fair to write a review for this (with such high praise) without picking a few things out. The only two things which I didn’t like, was the slight overuse of the octave down vocal (even though I do understand its part of the unique sound of the album) and the narration. I think even without the video, the listener should be able to follow the storyline without any narration. That being said, it may be what tells the story in the album format. For the film however I think it’s unnecessary to have narration in it, as the picture tells a thousand words.

I love the subtle humour throughout the film. There is an obvious amount of “in jokes” from the Cartel collective, but there is a lot, from the names to the subtle appearance from the crew that put a smile on the face. The acting is top notch. The star of the show, Flu, does an amazing job. A steely glint in his eyes in every shot, facial expression and actions are all so well co-ordinated. He communicates such a disparity of emotion, but especially the desperation of his character. I love all the work from the other cast members and extras, every one of them having a great “look” for the movie, everyone contributing a significant piece each to this project - great job Crate Cartel & affiliates.

Overall this album is worthy of a lot of praise, and one that will stand the test of time in say 20-30 years. It touches on a very important subject in suicide. A subject often overlooked and taboo to be spoken about, and one that has had a huge impact on the Oz Hip-Hop scene. It is a powerful and positive message brought into the spotlight. (There seems to be a big social shift in the last few years in raising awareness to it.) As the pressures of life and music can weigh heavy, and a lot of emotional and physical effort not to mention the money invested into yourself can be downright painstaking, there can be a correlation between music and life that can bring a person’s emotional state right down. This album touches on exactly that, ironically seeing the “Suicide Kings” team up in Geko & Flu. Locally relevant, I think the album does touch on the struggle that indie artists go through. The somewhat snobby, jaded opinions of a lot of the scene. The early years of this Oz culture was so community based, so loving and embracing, and there is a huge element of this which still exists, but there is a lot of ego and jealousy that is also predominant. I see a lot of people struggling like ScrewFace Bane, and sometimes I wonder about the emotional stability of these individuals. If anyone is reading this, and is struggling, just know it is ok to talk about it. Don’t put all your hopes and dreams into one facet of your life. It is all about balance and being happy within the person you are, to quote the great Prowla “it’s not who you rock in the scene, rather who you are in between.” In a fairly judgemental scene, sometimes others opinions/prejudices can bring you down, but others opinions mean very little in your “big picture.” If you are happy within yourself and your work, then that is the greatest gratification you will receive from your art. Having the support and praise of your peers is important, although not necessary, so remember to always give respect or props where it’s due, you can’t understand the impact that can have on upcoming or “struggling” artists, whether it’s musically or emotionally.

Overall this a classic release every Hip-Hop head should see, musical cinema at a very high level. It may not be up everyone’s alley, but is definitely perfect for anyone who appreciates real art. This review is blatantly gushing, but it’s definitely a release that’s deserving of such. One could hope for a larger platform for it be played, I would love to sit in a movie theatre and watch this.