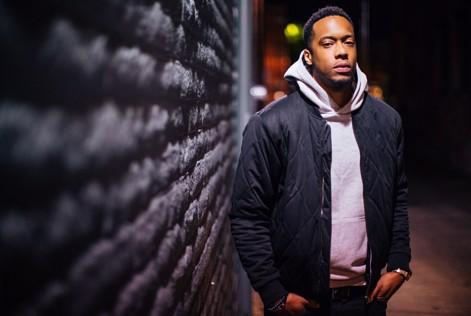 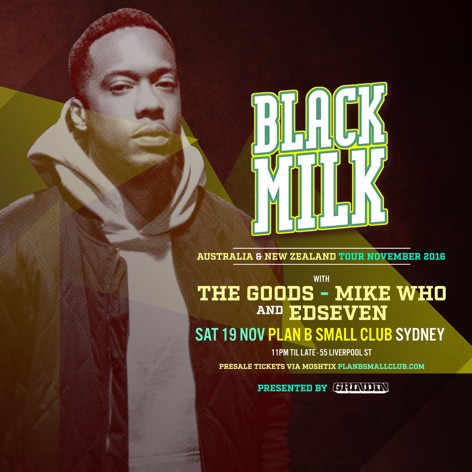 Black Milk is a master of beats and rhymes, renowned for his top-flight production, insightful lyrics and thrilling live shows.
The infamous Producer / MC will be supported by local artists’ The Goods, DJ Mike Who and Edseven.

Far from your typical rap act, Black has steadily added new sounds and styles to his
repertoire while working with a diverse group of collaborators - from Jack White and Robert Glasper to his own band Nat Turner.

As a producer, Black has held down his hometown of Detroit for over a decade, working with the city’s top talent including Danny Brown and the legendary Slum Village, who gave him his start on their album The Trinity. On his own, he’s created a catalog of solid solo rap albums: Popular Demand (2006), Tronic (2008), Album of the Year (2010), No Poison No Paradise (2013) and his latest If There’s A Hell Below (2014).

He also teamed up with Guilty Simpson and the late Sean Price to form the supergroup Random Axe. In 2015, Black released a live instrumental album, The Rebellion Sessions, with his band Nat Turner.

“Black Milk’s solo career represents a constant cycle of adopting and mastering new production styles and then abandoning them before they become crutches.” – Pitchfork

“His samples are elegant, his rhythms challenging and his drum kits tight.” – NPR

“Cross has no need for these extras; in his world of soul-tugging productions and machine gun-as-velvet delivery they are merely distractions. On this realisation, and in the moment, it was hard not be floored by the obvious: this is what talent with genuine poise really looks and sounds like.” – Dallas Observer

“Striking an impressive balance between being rehearsed and spontaneous, he proved his chops as a multi talented artist once again.” – Okayplayer

“It feels like Christmas every time Black Milk blesses us with a new record.” – FreeOnSmash