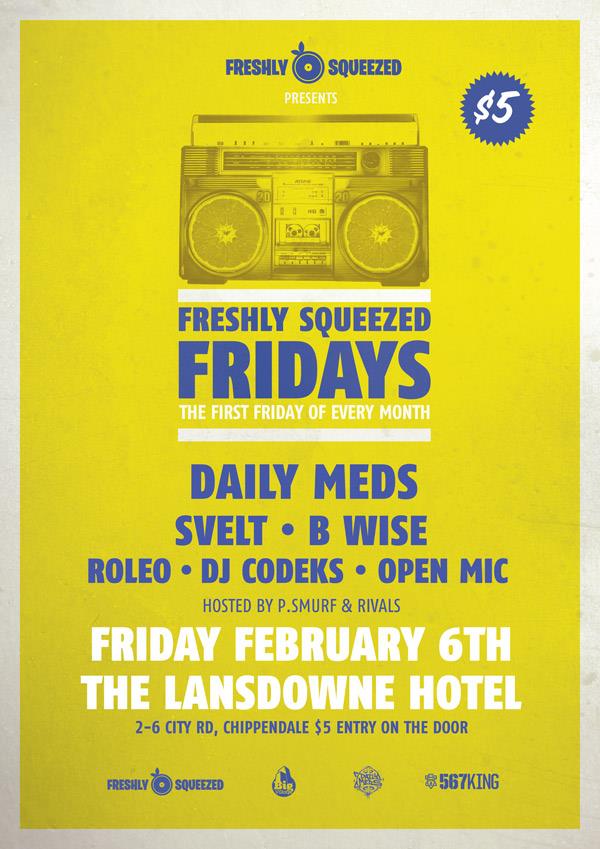 Joining them on the night we have the live DnB crew Svelt. Svelt are a live band that love electronic music. They draw on influences from locals The Bird, to the cosmic beats of the Brainfeeder label, to the heavy productions of Noisia. From Ableton-soaked bedroom laptop production, to raw guitar punk. Either way, it’s a mix that manifests itself with a heavy swagger. Featuring a guest appearance from their collaborating master of rhymes, Rapaport

Also jumping up to perform we have emerging Sydney MC B Wise, delivering a unique style of Australian Hip Hop for all the heads to vibe to. Daily Meds producer Roleo will also be "beating-off" throughout the night. And DJ Codeks from Down Under Beats crew will be spinning the freshness til late.

There will also be an open mic from 8pm for anyone interested in dropping some raps, vocals, beatbox, spoken word, whatever!! Free drink for anyone who jumps up. Hosted by P.Smurf and Rivals and presented by Freshly Squeezed, Freshly Squeezed Fridays is set to get you sweating this February!

$5 entry - Held on the first Friday of every month at The Lansdowne Hotel.

For more info head check out the links below.