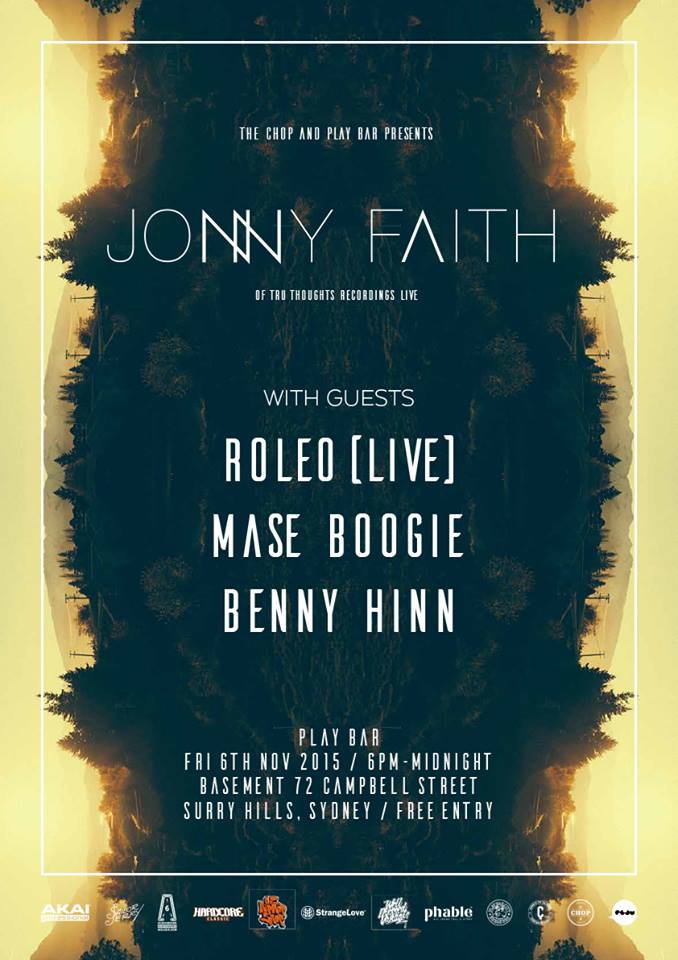 Jonny Faith live in Sydney as part of his national tour and recent album release "SUNDAIL" with UK recording label Tru Thoughts. Also with support from some amazing live production acts and some of our city's top Dj's such as Roleo (Live), Mase Boogie of Paper Plane Project and Benny Hinn .... Definately not a night to me miss.

***JONNY FAITH***
Drawing on a wide range of musical influences from the past and present, Jonny Faith has crafted his own individual sound overflowing with intricate percussion and lush, organic tones.

“This guy’s music is rooted in hip-hop but oozes cosmic sensibility” -Hyponik.com

Originating from Edinburgh, but now based in Melbourne, Faith gained hisear for rhythm and sound as a DJ and turntablist spinning hip hop, jungle and D&B, both in the UK and Australia, for some years. After a while, like many DJs, he turned his hand to his own productions and sound. Faith’s early music had a strong dub and reggae tinge, with one early single release coming under the alias Dropwise Dubs through the Sydney based Foreign Dub imprint. Although dub sensibilities and production techniques still underpin Faith’s style he moved into the hip hop future beats scene with aplomb hosting both a radio show and club night in Sydney dedicated to the emerging experimental beats sounds sweeping the globe.

In 2011 Faith took this instrumental hip hop tip in his own direction with his “Blue Sky on Mars” EP for Civil Music. Adopting a strong, galactic, synth based theme for the project, this first offering featured sci-fi samples, futuristic beats and remixes from the likes of Ital Tek and Dizz 1.

Today, Jonny Faith’s sound has grown into a warm and emotive experience summed up by his debut full length album forthcoming on Tru Thoughts. Entitled ‘Sundial’, this first LP is a rich tapestry of individual sonic threads, expertly crafted into a single form. Intended as a full, feature length work rather than throw away, standalone tracks it is one to plug in to and digest from start to finish.

Future projects from Jonny are set to expand upon his worldly, cosmic sound and incorporate even wider influence from across the universe.

He is also in preparation to take his sound to the stage and utilise his DJ-ing and Turntablist experience in a new set incorporating his own tracks, remixes and album material.

The Chop is a night being held at Play bar in Sydney’s design, music and fashion hub of Surry Hills on a monthly basis. The Chop is an evening dedicated to showcasing the talents of up and coming, as well as already established beat makers/producers. The call has been sent out to all bedroom bangers, mpc masters, beat junkies and production prodigies to bring their finest cuts of A grade beat and they have answered with cleavers in tow.

All performances will be live and butchered to order for your audio taste buds.
Along with show casing these talented artists, The Chop will be supported by some of Sydney’s finest DJ’s. They will spinning the most mouth watering assortment of funk, soul, boogie and hip hop to accompany these talented purveyors of cold cuts and dope beats.

Play bar is an underground urban speak easy in Surry Hills frequented by everyone from corporate city slickers looking for a street style getaway to the cool kids of inner Sydney, which makes it the perfect venue for The Chop.
This is a free event designed to promote the little known beat scene in Sydney and it is well worth stepping into this musical meat market to see the range of produce.

Falling off the bone this every last Saturday of the month.

For more details head over to the event page now.