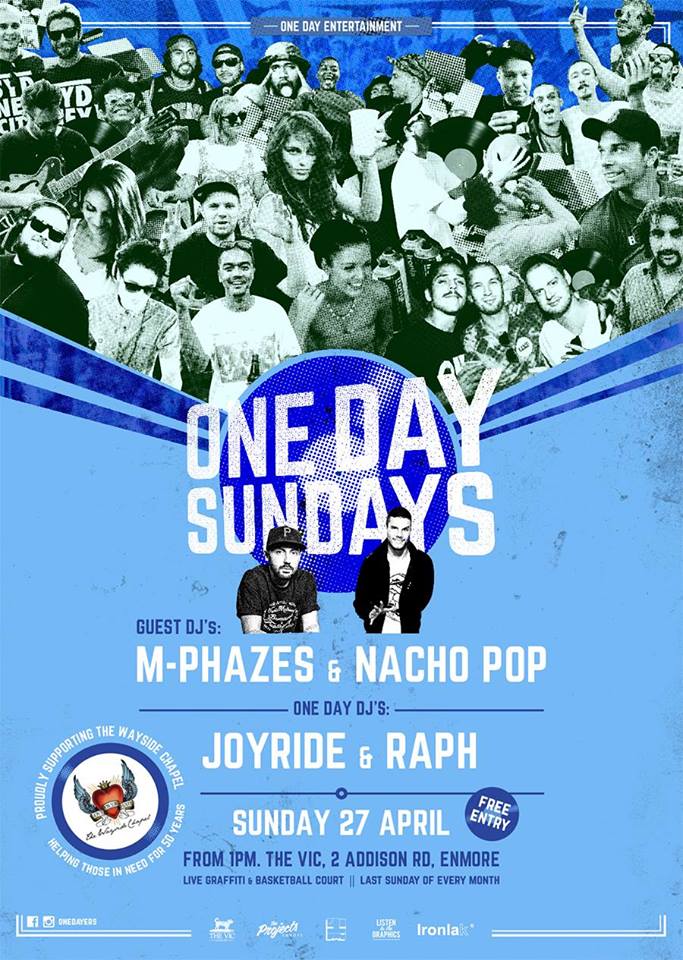 One Day Entertainment are proud to present the next installment of Sydney’s much loved hip hop party One Day Sundays, which will be going down on Sunday 27th April at The Vic in Enmore.

This month’s ODS will be falling on the Sunday of Sydney’s Anzac day long weekend, whether your festivities are winding up or still very much continuing, come join us at The Vic for all the usual One Day Sundays goodness.

We’re stoked to welcome the internationally renowned M-PHAZES (Mel) as our guest DJ for April. Arguably Australia’s most successful hip hop export, M-Phazes has produced for Eminem, Kimbra, Pharoahe Monch among countless others, won two ARIAs and established himself as one of best producers doing it, within Australia and beyond. Having recently toured Australia as part of Eminem’s Rapture festival, M-Phazes DJ set at One Day Sundays is sure to be a legendary moment.

Also spinning for April’s ODS will be Sydney dance legend NACHO POP. Originally hailing from the US, Nacho moved to Sydney in his late teens and, after receiving tutelage from an esteemed, elderly New Zealand dance sensei, quickly established himself as a leading choreographer and dancer. Nacho is one of One Day Sundays’ biggest supporters and we are pumped to have him as a guest DJ for April!

One Day DJs JOYRIDE & RAPH will, of course, be on deck to deliver that monthly dose of beer garden block party freshness. Plus, a basketball court, a slow cooked spit and a huge graffiti mural painted by some of Sydney’s best – there’s nothing else out there quite like it.

This ODS we'll be raising awareness Wayside Chapel, who are celebrating 50 years of providing unconditional love and support for the people on the streets of Kings Cross. We'll be making a donation to the Wayside Chapel and there will be opportunities for punters on the day to do the same.