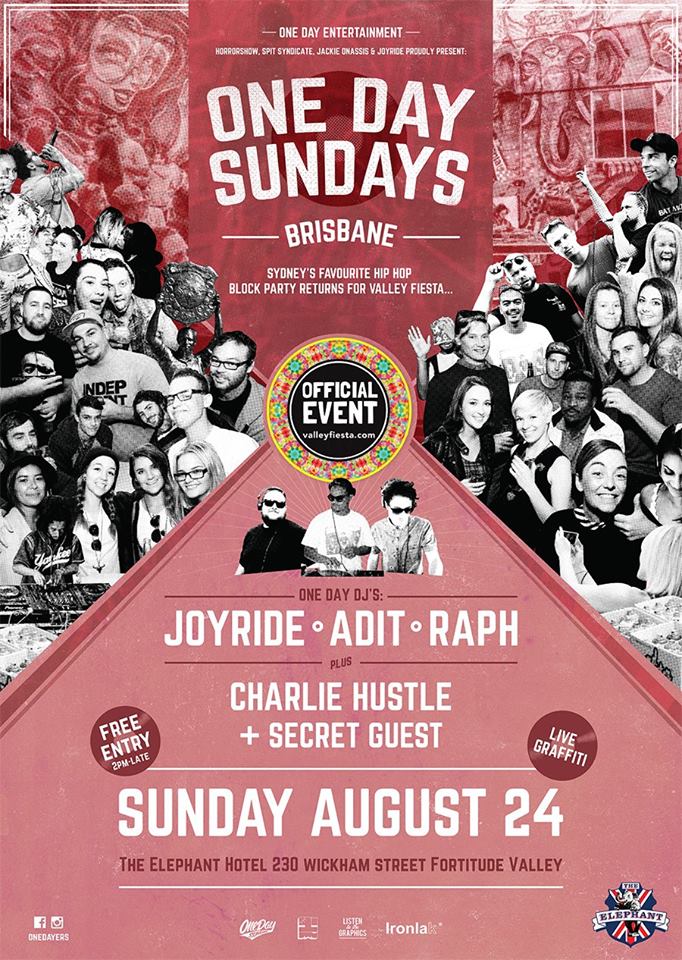 Sydney hip hop crew One Day are returning to The Elephant Hotel for the second Brisbane installment of their infamous block party ONE DAY SUNDAYS on Sunday AUGUST 24 as an official VALLEY FIESTA partner event.After the smashing success of the Brisbane launch event in June, the entire One Day crew (Horrorshow, Spit Syndicate, Jackie Onassis and Joyride) will be heading back to Fortitude Valley to continue the festivities.

Now in its second year, ONE DAY SUNDAYS is a series of parties curated by the One Dayers, combining a beer garden atmosphere with awesome tunes, live graffiti art, delicious food and all round good vibes – plus did we mention FREE ENTRY?

One Day DJ’s JOYRIDE, ADIT (Horrorshow) and RAPH (Jackie Onassis) will be spinning bangers all day alongside local hotshot CHARLIE HUSTLE and a very special surprise guest – all of whom will be sure to keep the dance floor pumping well into the night. Some of Brisbane’s top graffiti writers will be painting live courtesy of our friends at Ironlak, plus the entire One Day team will be in attendance and likely continuing the celebrating of their new album ‘Mainline’ which drops August 1st.

ONE DAY SUNDAYS at THE ELEPHANT – Sunday August 24, 2pm til late. Great tunes, great graffiti art and food all in the Elephant’s outdoor courtyard. The last one was huge and this one is set to be even bigger so bring your crew along and get down with the One Dayers!