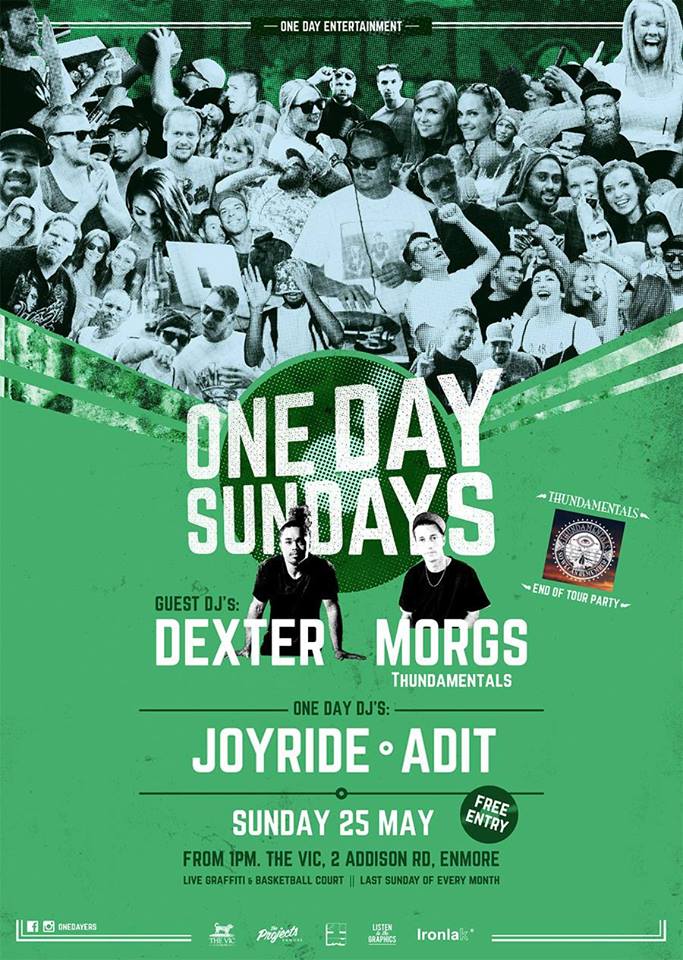 One Day Sundays May 25th[/caption]

One Day are excited to announce the next One Day Sundays which will be taking place on Sunday 25th of May at The Vic in Enmore.

For this very special edition of ODS, we are thrilled to host legendary turntablist/producer DEXTER as a guest DJ as well as welcoming back the Thundamentals' DJ MORGS alongside resident One Day DJ's JOYRIDE and ADIT.

Four-time Australian DMC champion Dexter is a former member of The Avalanches, the Melbourne electronic group whose seminal debut album ‘Since I Left You’ is widely regarded as one of the most important Australian albums of the modern era. Dexter has been described as ‘a man who singlehandedly reworked the genre of sample-based music’; his DJ set at One Day Sundays is set to be nothing short of legendary.

Sydney crew and long time friends to the One Dayers THUNDAMENTALS have been kicking some serious goals with the release of their new album 'So We Can Remember'. We’ll be celebrating the end of their completely sold out national tour at May’s ODS with DJ MORGS (Thundaz/Jones Jnr) rocking the The Vic providing our monthly dose of block party freshness.

Come and join people from all over Sydney (even interstate) in one of the city’s best beer-gardens for an afternoon/evening of dancing, basketball, live graff and incredible food and generally awesome vibes – plus, it’s FREE!