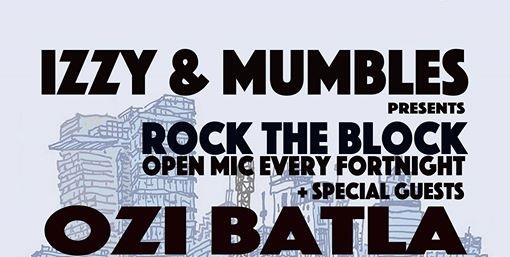 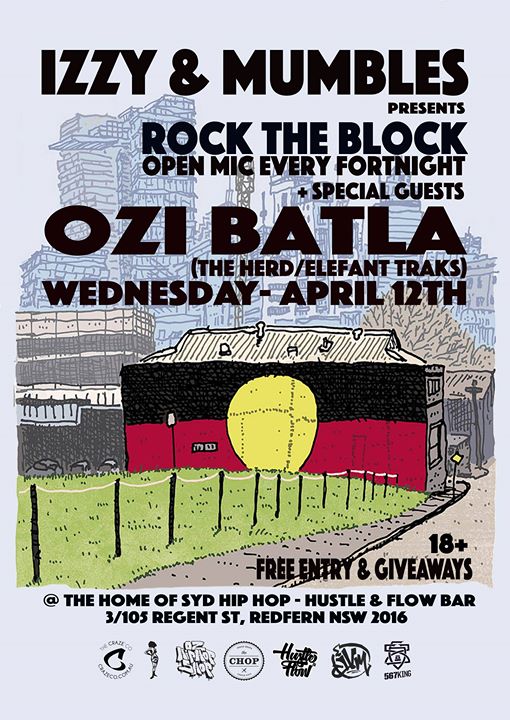 Open Mic Cypher over Live Beatmaking.
A showcase of freestyle emcees and beatmakers.

Come down and be apart of the newest and dopest freeestyle/beatmaking event in Sydney - ROCK THE BLOCK!

This event will be will be held @ Hustle & Flow Bar EVERY OTHER WEDNESDAY.

Wrote/co-wrote tunes such as, including "77%", "Put It On Wax", "Starship Troopers", "A Bright Tomorrow", "Only 19" and the early Oz hip hop breakthrough/down "Scallops".

The first Elefant Traks release in 1998, and in 2001 The Herd evolved out of the fledgling label.

In 2002 he battled, winning the Verbal Mechanics NSW final, NSW Stealth Battle. Got to semis of Revolver, and invited to first Battle for Supremacy.

Five Herd albums, a solo record and a third Astronomy Class project in the works.

Izzy has been a part of the furniture in the Sydney Hip Hop scene for a third of his lifetime. After coming in contact with the Krosswerdz crew in Sydney many years ago, it empowered him to utilize his passion as an emcee and his faith in God and use it to communicate life and hope to a greater audience.

Izzy has a powerful testimony about redemption, perseverance, identity, culture and growth. Izzy has a very potent lyrical approach to songs and is not afraid to approach a difficult topic and tackle an issue in a track with honestyand heartfelt lyrics.

In the past 2 years Izzy has stepped into a leadership role in the Krosswerdz Sydney minstry and has been hosting,preparing and participating in the monthly Krosswerdz jams in Sydney as well as mentoring and discipling some of the individual participants through the ministry.

Every Tuesday night at a local youth centre, Izzy helps to host the weekly cypher group which is gaining some great momentum and is an amazing opportunity to mentor young emcees. This group is a multi-cultural, multi-faith and multi-lingual group of young artists. This has been a place of refuge and acceptance for many young emcees to find positive relationships in a supportive environment.

For many it is a place of accountability, growth and light. It has also been an opportunity for some of the young guys to better their English skills as they grow in their craft as an artist.

Izzy has been given a great gift to be able to relate to people from many walks of life, with Hip Hop and Ministry as a focus in life, he has been lead to many youth groups, churches, community groups, juvenily detention centres and many more locations to spread a message of life and hope through Hip Hop.

Izzy also plays a big role in the Indigineous community within Australia; participating in the national radio show as a guest and sometime co-host, participating in community events, gigs and also workshops for young Indigenous Australians. With debut Izzy n The Profit album “Pulling Strings” gaining some positive attention, there are plentymore projects in the pipeline from Izzy including Debut solo album “Snake Eyes”.

An emcee who speaks from the heart and has an acceptance and understanding of people that makes a great impact.

Get down and support the culture and enjoy some of Sydney's finest Live Hip Hop.