The Chop is an evening dedicated to showcasing the talents of beat makers/producers.

After a month hiatus your favourite monthly beat-maker night THE CHOP is back double fold with a killer line up for you guys. With live beat sets from master butchers themselves JAYO (second half and beat smith of duo Yum Yum) and CARATGOLD of the Groove Dealers both bringing the fresh beats. Also joining us all the way from Seattle USA for our Dj showcase the man himself ZAC HENDRIX an established Dj/Producer and dj for Del The Funky Homosapien dealing out the fine cuts with THE CHOP residents RAINE SUPREME & BENNY HINN.

***JAYO***
Originally from the far south coast of NSW, Jayo has no formal musical training with the exception of Blues guitar as a young kid after which he immersed himself in hip hop, funk, soul and reggae.
In his teens, he moved to Canberra and soon started DJing and putting on parties throughout the city. Some years after becoming a father to twins, music continued to call on him putting together a popular monthly reggae/dub party which evolved into a 12 piece hip hop, funk and dub band called ‘The Rock Steady’.
The Rock Steady gave Jayo the opportunity to focus on production and live performances throughout the Canberra festival circuit. With a production foundation influenced by the ideas and techniques of the great Dub engineers and motivated by Hip Hop’s innovation, raw skills and style, he treats sampling as a chance to create something new whilst paying homage to the past.
Several extended stays abroad in the USA, UK, Europe and the South & West Pacific have greatly inspired and improved his musical ideas, knowledge and collection.
As both a DJ and producer, Jayo has had the opportunity to support respected artists such as Katalyst, Hau, Hermitude, Oddisee, Houseshoes, Blu (Blue & Exile), Sidestepper (Colombia), The Red Eyes, Kingfisha, Lotek, D’opus & Roshambo, Spit Syndicate and Salmonella Dub amongst others.

***ZAC HENDRIX***
Zac Hendrix is a dj, producer, and all around funky cat, as it turns out. He was born in the city of Seattle and grew up in nearby South King County. After early years as a bedroom dj, and subsequent years performing locally, Zac officially entered the independent hip-hop game on a full-time basis in 1999. He has traveled extensively as the DJ for Del the Funky Homosapien (since ’02), Bukue One (since ’99), and Insult2Injury (since ’96). He is also a member of The Handsome Skeletons, Hendrix Jones, All Flags Burn, and several other noteworthy groups that you may not have heard of yet. Whether he’s rocking a large festival or a small club filled with the most discerning funk aficionados, he’s guaranteed to turn some heads. This is definitely not “dj so and so”. The message is positive, the beats hit hard, and the vibe is earthy and honest… and did we mention funky?
Zac has visited Australia previously on tour with Bukue One and Del The Funky Homosapien and ripped PLAY BAR apart last time he played at the 45 Sessions & will being laying down an epic showcase set podomatic.

***CARATGOLD***
After getting busy as an Mc back in the early 2000′s in and around Canberra ACT my crew at the time ALIKEMINDS supported any and all big hiphop acts that came to town (Jungle Brothers, Braintax/Mystro, Bliss & Esso, Lyrical Commission the list goe’s on) With some of the most raw and talented Mc’s around such as Anton, Audible and the new renown Maggot Mouf (Broken Tooth Melbourne) and Canberra’s very own Dj Buick 3x DMC Champ, we tore up the local Battle scenes and generally represented. Sadly people had to go places and the crew never released any official EP. But the name Caratgold continued as a passionate producer and part time Mc. Now residing in Sydney i carry the torch forward as a local Soul/Funk/HipHop Dj and Beatmaker.

***THE CHOP***
The Chop is a night being held at Play bar in Sydney’s design, music and fashion hub of Surry Hills on a monthly basis. The Chop is an evening dedicated to showcasing the talents of up and coming, as well as already established beat makers/producers. The call has been sent out to all bedroom bangers, mpc masters, beat junkies and production prodigies to bring their finest cuts of A grade beat and they have answered with cleavers in tow.

All performances will be live and butchered to order for your audio taste buds.
Along with show casing these talented artists, The Chop will be supported by some of Sydney’s finest DJ’s. They will spinning the most mouth watering assortment of funk, soul, boogie and hip hop to accompany these talented purveyors of cold cuts and dope beats.

Play bar is an underground urban speak easy in Surry Hills frequented by everyone from corporate city slickers looking for a street style getaway to the cool kids of inner Sydney, which makes it the perfect venue for The Chop.

This is a free event designed to promote the little known beat scene in Sydney and it is well worth stepping into this musical meat market to see the range of produce.

Falling off the bone the last Saturday of the every month.

Head over to our Australian hip hop gig guide now and peep the event info here. 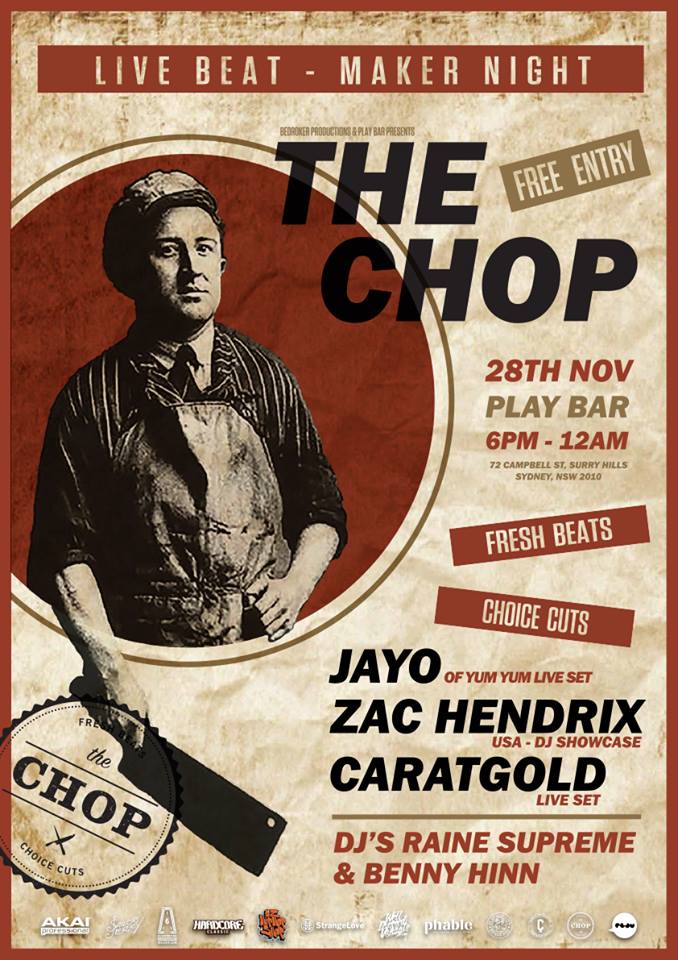