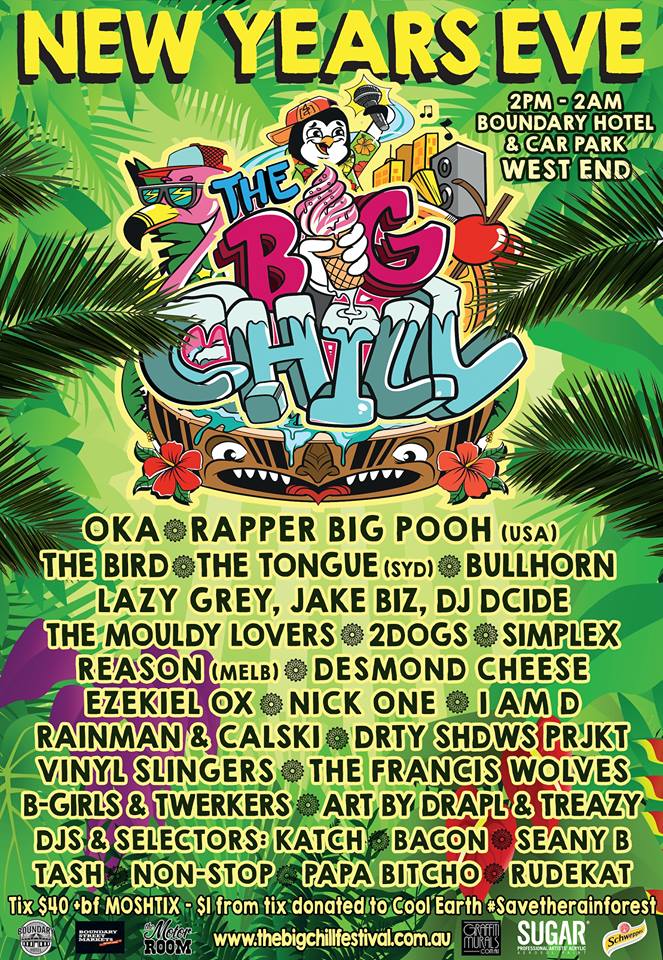 This year we were lucky enough to spend New Year's Eve in Brisbane at The Big Chill Fest, taking over West End for the second year running. And, if last year's festival was anything indicator, then tonight punters were certainly in for a treat. Although it would be hard to squeeze every minute of every act on tonight's long-listed billing, OHHS made sure to spend quality time at every staged event catching all acts. Everyone performed at the top of their game at tonight's event and this review promises to highlight some of the stand-out moments from the event.

The Amazon-themed event kicked off early with all opening acts rocking out over every stage with the jungle cocktail bar in full swing. Simplex's and Myk Reid's set was off the hook, stirring up the crowd with a few of everyone's favourites; Schoolyard Politics and Beautiful Day over a hyped set. These are two truly great performers in the way they physically engage with their audience with some handy place-cards driving up the atmospheric pressure.

Further performances from the likes of I Am D, DJ Seany B, DJ Katch, Calski and Desmond Cheese filled the mid-afternoon's entertainment and while feeling the effects of some jungle juice, punters had submerged into the Underwater stage to get wet in preparation for Lazy Grey, Jake Biz and DJ Dcide. Straight from the get-go the fans packed in as the music banged out, the crowd frothing with every track for more, which is exactly what it got when Overproof Pete, Gaz Hazzard and Suss One answered the call, joining the boys to drop that Kold Heat on them.

The festivities didn’t slow down with The Tongue and Calski peeling off their new joints on the Underwater stage and Vinyl Slingers were keeping the dance floor packed and moving on the outdoor stage.  As the night kicked on OHHS got the chance to see the headline act Big Pooh sustaining a charged crowd through a show that really got the fans amped. Seeing Pooh live was a first and definitely an act to recommend as he really knows how to tear the roof off.

All in all this evening was a special occasion to ring in the new year with outstanding live music and crowd to boot who came and left with one thing and that was a good time. OHHS would like to thank Kel and everyone involved in putting together such a great event on. OHHS looks forward to being a part of The Big Chill festivities next year.