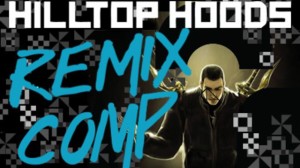 In perhaps a world first, Hilltop Hoods are releasing the stems to their upcoming track Now That You're Gone (produced by Trials) BEFORE they release it on their album out March 9th.

You’ll be able to remix/add your own sounds/or MC over the top before you’ve heard the finished product so you have complete creative reign.

So if you're a producer or MC, download the parts from the link below, then upload the finished product to your new or existing triple j Unearthed artist page and add 'HHRMX' to the title.

Not only could it be played on triple j radio and triple j Unearthed on digital radio, but you could meet the Hilltop Hoods backstage when they come your way on tour, plus get a triple j and Hilltop Hoods prize pack.

Entries are open until midnight Sunday March 4th. Triple J will be playing the best tracks as soon as they are live on the site during the entry period, and will be picking five finalists after entries close to feature on the radio for a week from Monday March 12th, with the overall winner being announced on Tom & Alex on Monday March 19th.