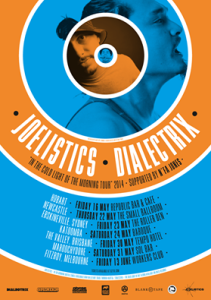 Elefant Traks, Blank Tape Music, Grindin' & Premier Artists present some of Australia's most respected MC's who are joining forces for a tour which sees Joelistics & Dialectrix as co-headliners and special guest N'fa Jones.

Joelistics great gift is the crafting of common language into evocative turns of phrase. He opened up a new lane in local Hip Hop with his debut album "Voyager", and his new single "In the Morning" suggests that he’s confidently moving further from the pack. Celebrating the realness of living in the moment without glossing over absent milestones, "In The Morning" is so much more than a leftfield indie Rap anthem. Drawing on influences from ‘80's era English post Punk and ‘90s Grunge through to Hip Hop, the Melbourne based MC, producer and singer offers us a ride into his trademark excursions into the human psyche. The single is taken from new album "Blue Volume", set for release on Elefant Traks in June.

Joelistics - 'In The Morning' [Official Video]

Undoubtedly one of Sydney’s favourite hometown artists, Dialectrix is regarded as one of the most prolific MC's and Hip Hop performers in the country. 10 years into his career the passionate lyricist has built up a legacy featuring three full length LP's ("Cycles Of Survival", "Audio Projectile" & "The Cold Light Of Day"), an EP "Satellite" and his collaborations with Down Under Beats Crew and Gully Platoon. Having recently reached the 2013 Coopers Australian Music Prize nomination short list for his latest album "The Cold Light Of Day" Dialectrix will be performing music from this and the rest of his extensive catalogue.

Special guest of the tour N'FA Jones is currently putting the finishing touches to his new album "Black & White" which will be released on Drapht's "The Ayems" record label later this year. Having toured across Australia as both a solo artist and as part of ARIA Award winners 1200 Techniques. N'FA Jones' live performance continues to captivate crowds and turn docile audiences into a frenzy of interactive receptors of his message and positive energy.