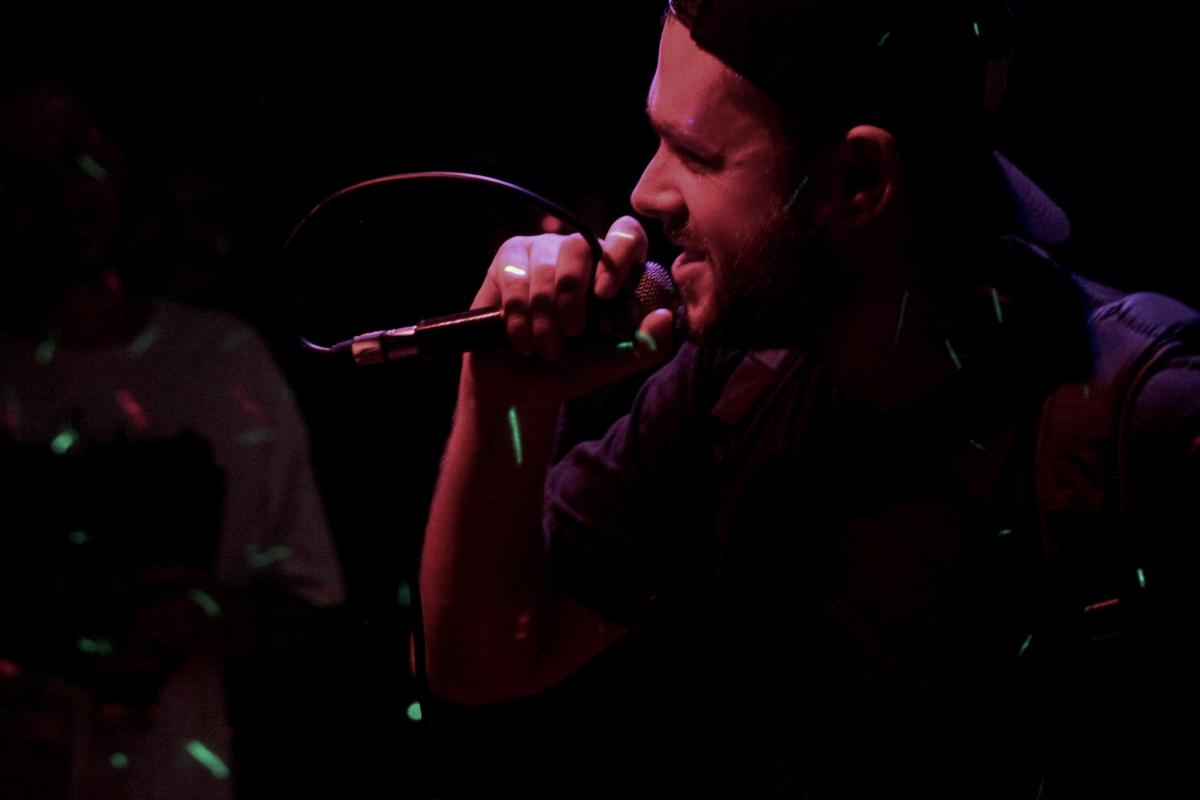 We caught up with Australian hip hop artist Ben Iota for a chat about what has been going on music wise and what we can expect in 2018 from him.

Hey mate, it's good to catch up hope all has been well?

Life is great. Let us begin.

You are based in Darwin and have just had a new member of the family arrive, how has that been going?

Darwin has been good to me and mine for the past couple of years. We find it to be a relatively easy place to live. The pace of life is slow, the sun is usually shining and the people are generally neighbourly. These are the qualities of Australia that I cherish. I am in the right time of my life for it. The frosty big city rat race aint calling me no more. And yes, we were lucky to be blessed with the arrival of our second child recently, who were are wrapped with.

Do you find it hard sometimes to find the balance to do music while raising a family?

Yeah its a tricky balancing-act. Having children has changed my perception of time. It was only after becoming a parent of one that I realised I had ample free time when I didn't have a child. It was only after becoming a parent of two that I realised that I actually had a bit of time up my sleeve with only one child after all. Now I have two children, I am wondering if I can squeeze any more time out of my 'full' schedule. I probably could, but it is going to take some serious self-discipline, and understanding from the people around me. Releasing a single once or twice a year seems like a more realistic goal, but we'll see. I would love to continue this musical journey.

I first started hearing your music with the album Born free that was released through Butterthief down in South Australia, Has the road from there till now been hard musically?

Nah, it hasn't been hard at all. For a few years after 'Born Free' I didn't release anything, but still worked on music steadily. I did gigs, hit open mics and rapped on street corners around Sydney (where I was living). Shout outs to Tall Papi. I wrote lyrics, jammed with a band, and just enjoyed the musical experiences I was having. After Sydney I moved to Darwin and linked with local champions like TASK and Dan the Underdog. They have been welcoming and supportive of what I do, and we have gotten busy collaborating. It has been a fun time.

Born Free seemed to be well received by the Australian hip hop community what would have been your favourite track from it?

I was happy with the response to it. I sold all my personal copies, got a bunch of gigs off the back of it, had a few press opportunities, gotten some good support on radio, and have had more than a few people tell me the songs have impacted on them. This all amounts to a win in my book. My favourite track was and is 'Iota'. It sums up my worldview and where I see myself in it. It has aged relatively well.

What is it like releasing music independently compared to when you were with the label, is it a lot harder now or is it good doing things at your own pace? Has working by yourself giving you a different outlook on the way you release music?

Nothing has really changed in regards to the pace. I have always worked at my own pace. I am inspired by those I work with, but I am never pushed. Despite not being released on Butterthief I still work closely with other people, including Social Change. Its good being self- reliant because I am learning about the industry, understanding what fellow independent artists do to leverage themselves in the game, learning what they have been telling me for a little while: 'your album is your business card'. Get it out there and make sure you follow-up any connections. It seems that you can't be too cagey with your music anymore. Well, you probably could, but I think it would keep you in your corner. I have also learned about gatekeepers- labels, radio stations, promotors, cliques of artists, etc. I never had to deal directly with any of these people previously, in terms of attempting to squeeze opportunities out of them. However, I see it now and have had small breakthroughs on that front. If I had a bit more time up my sleeve I feel like I could unlock the secrets to this game. Getting older now I stay active for the joy of creating, and for performing. A lot of people don't have a craft or creative outlet in their lives. I feel fortunate I have one in mine, so I keep going forward with it.

What made you fall in love with hip hop and the culture we love?

Rebellion and non-conformity. I felt out of step with the mainstream when I was young. I was looking for an alternative to the lack of anything meaningful. I found graffiti first, which gave me a feeling that there was something magical here. Doing something that was so heavily stigmatised and misunderstood by the general populace (this was in the 90s in Adelaide), and was risky to do, gave me a rush and a sense of belonging. It was my middle-finger to the conservative forces and values that I was surrounded by. It was a different world. Hip Hop music was next and had a similar impact on me. It gave me a bigger purpose, it gave me an outlet, it gave me an identity and further validated my 'outsider' status. It formed me. Even now as person who may seem like every other bum on the bus, I know there is a point of difference that I got through Hip Hop. I recognise it when I randomly meet other old heads with Hip Hop in their DNA. Its an experience that stays for the long run, in some way.

You have recently released a brand new 15 track album produced Dan The Underdog, How did this release come about? How did you select the beats for this project? Where did you record this album? What was working with Dan? Is this the first time working with him? Did you approach this release differently than you would normally when working on an album? Can the fans expect to hear similar style with this album compared to you last releases?

At some point in late 2016 Dan suggested we do a 'joint' together. We started by doing a single song, which was never released, but we both liked. Around that time I was revisiting old A Tribe Called Quest albums and realised how much I still love that jazz Hip Hop style, vibe and attitude. Its just good, laid-back Hip Hop music that means something. Even in my mid-30s, it still resonates with me and is relevant to my life, and thats the type of  music I want to make for other people. Anyway, with a new child on the horizon and a bunch of lyrics up my sleeve, I stepped to Dan with the idea of doing an album of all jazz Hip Hop, and getting it done before my son-to-be arrived. Dan was down. I linked him with the first samples in late June and by early September we were releasing an album. It was all recorded in Dan's studio (apart from the two bonus tracks), and produced by Dan, with me playing basslines on a bass synth that gives the songs extra depth 'in da clurrrrb'.We had a good energy and finite time to finish the album in, so we went hard. I felt the stress of the looming deadline and the pressure to perform, but we had a lot of fun making it. Dan and I have a similar sense of humour, values and outlooks on the world, so we clicked. I hope we can work together again. He is a machine when it comes to making Hip Hop music, and a really good-hearted human to boot.

Any advice for other upcoming independent artists that are thinking about releasing an album or are starting their hip hop journey?

Everyone is on their own path, so I can only speak on the advice I would give a younger version of myself, with my limited knowledge on how this all works. Here goes:

Speak from the heart- thats number one. Be true to yourself, but don't be afraid to change, because you inevitably will if you are living life. Don't go by the book. Allow your musical journey to unfold. Believe in your process and dedicate yourself to your craft. Don't listen to the scene and don't become bitter by all the setbacks. Create your own thing. Jump at the opportunity to perform and enjoy connecting with people through it. Get the experience. Be a martyr and do mad favours when you start out. Don't charge people for beats or verses. Don't decide that $400 is your going rate for gigs. Just do the gigs and get the feel for performing. Use features as opportunities to get your name out, but make sure you respect the artists you collaborate with. Be real with supporters and be humble when you succeed. Be real with the more decent industry people out there and look to create something with them. Put a bit of your hard-earned into your music. That means getting a publicist, travelling interstate if gig opportunities arrive and making your product quality. Vinyl and merch are worth the shell-out if you have disposable income. Connect with like-minded people, including musicians and artists of all sorts, and get busy. Don't become egotistical. Diverge from the path of the parasites, vultures and toxic people. Try not to belt them. Get knowledge. Study and travel help with that, as does living life and making mistakes. Get your mind right to navigate this unpredictable, confusing, and sometimes-demoralising journey through music and industry. If you stay balanced, you will look back at this time as a rewarding time in your life, even if you don't achieve all your goals. And you may be even be one of the few who strike it lucky. None of this will make sense until you get out there and start doing, so take the first step and keep it moving.

A music video for 'Do Dat', from the 'Jazz' LP, should be released around the same time as this interview. Keep an eye out for that on Youtube. I plan to keep gigging around Darwin at random intervals when the opportunities arise, as I have been continually doing for the last year and a bit. A launch is in the works. I also hope to chip away at making new songs, in a similar vein to the last album, because I am still loving jazz beats, but made via a different studio method. It's all about the process for me. Its gotta be fun and interesting. I am excited to announce that I will be launching a music-based blog in April. It looks fill a void in the current industry landscape. I can't give too much away but I can promise it will be quality, with some awesome artists on board. The Ben Iota Facebook page will give notice when the blog is live.

Was good to catch up mate, look forward to peeping some new music this year.

Cheers! Thanks for the reaching-out

Stay up to date with Ben Iota music and blog happenings at: