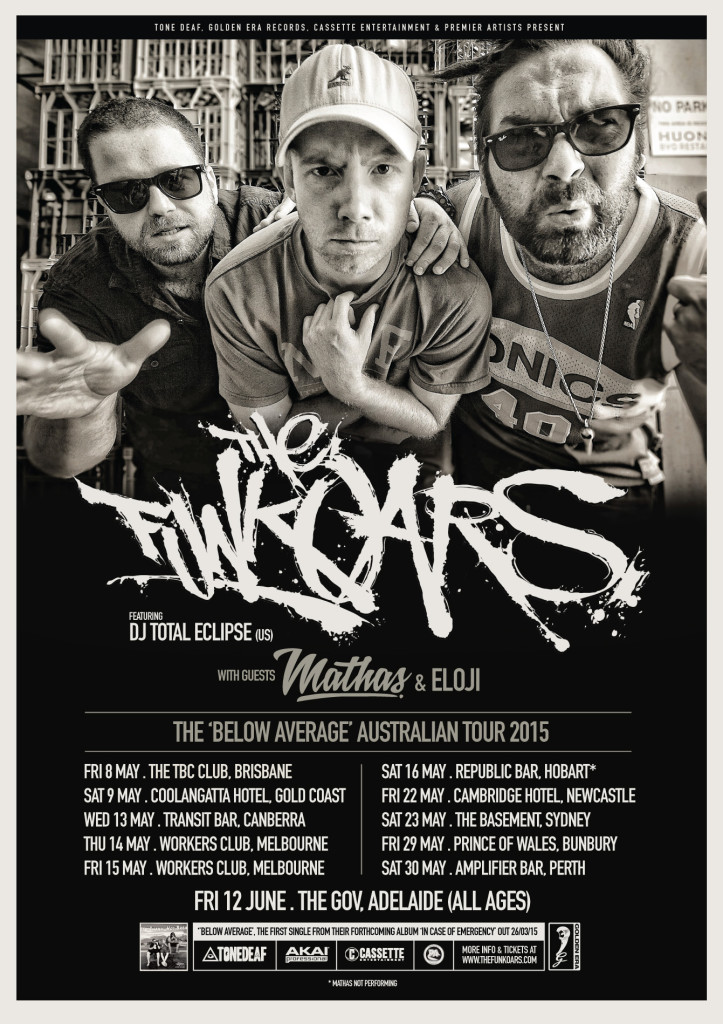 Everything from Larry Emdur to celebrating The Price Is Right, The Funkoars talk shit while two fans stuff themselves with dry WeetBix.

We get all this and more from a deep billing at The TBC Club, a dank little dive fit for teenage rap cyphers or a gangster’s den that manages to squeeze in 100 fans. The night starts with I Am D with DJ Immaculate on a tiny, cluttered stage with a letterbox view. The Brissy MC tries earnestly to involve the slow-building floor space using The Daley Grind and Girls In The City to bring the punters to the front.

Sharing the 11-stop tour, MC Eloji steps out with a smooth set, harmonising over hooks and sharing his homeboy Branford’s chords with the crowd as he beatboxes and croons. Eloji finishes up with a positive freestyle a cappella. Also on the ‘Oars tour, Perth MC Mathas intrigues most with his blend of melancholic soundtracking behind his throat singing and frank delivery of rhyme, performing his own phone dialogue mid-track. The X-Ecutioners’ DJ Total Eclipse steps out to scratch-fuck some KRS-One while a midnight chant for Golden Era’s whores of funk ramps up.

They’ve been together for more than 15 years, says Trials, fifth album on its way and they’re still rapping dick lyrics. Finally, The Funkoars show the kids “this is how hip hop is supposed to sound” and trump out their old shit before sending out the aforementioned tribute to Larry Edmur, including a The Price Is Right wheel and two suckers to have a dry WeetBix eat-off during Kidney Shifters. Now the whole venue is a Bix-spitting mess. Adelaide’s purveyors of dick-rapping debauchery close at 1am but not before reminding us of that fifth LP on its way with Below Average.