Main Event Is Back For Round 2

Main Event Is Back For Round 2 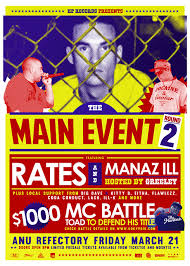 At Main Event Round 1 local boy Toad was competing among a draw of 8 MC’s that included heavy weights Greeley and The Tongue.
When the action wound up just Toad was left standing after defeating Tongue in the final to take home the $1,000 prize.
On March 21st he defends his title at Main Event Round 2.

We have 4 MC’s going head to head for the shot at battling Toad in the final for the $1,000 cash prize.
To keep things fair the judging panel on the night will consist of Greeley, Manaz Ill and Rates.
Battle MC’s are welcome to enter for a chance to win the $1,000 – visit here to enter:

Between battle heats we have more top shelf Aussie Hip Hop for you with 30 minute sets from two acts that have both been making mad noise around the country.
Rates and Manaz Ill.

Rates – Former battle MC hailing from Western Sydney.
Released his successful debut album “Destroy And Rebuild” in 2013 and has toured the country extensively with his younger brother Kerser performing at sold out shows and festivals.
Also well known for his song and video series “Nightmare”.

Manaz Ill – Established Adelaide battle MC with recent success taking out $10,000 at “The Language Of War” battle.
As well as staying active in the battle scene Manaz has also been touring his new album “What It Look Like” released by himself and producer Mdusu as MDMA.
Main Event Round 2 will be the Canberra launch show for the new album.

Along with the interstate guests we have sets from local artists Big Dave w/ Kitty B, Eitha, Flawlezz, Coda Conduct, Lash and Ill K. 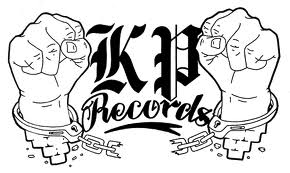 If you couldn’t make the first instalment of Main Event you missed some class A hip hop, a chill vibe and some classic entertainment on the battle stage.
Join us for round 2 and let’s do it all
again!

Here are a couple songs from Rates.