RITTZ - Top Of The Line Tour 2016 at Royal Melbourne Hotel 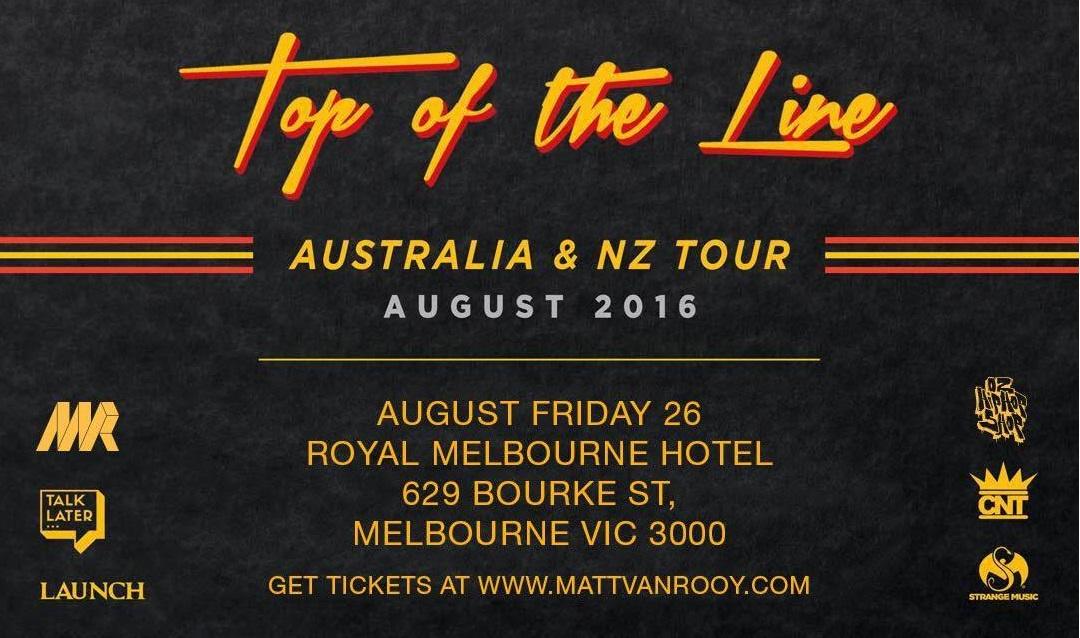 RITTZ - Top Of The Line Tour 2016 at Royal Melbourne Hotel

It has been said that - ‘If you’re not fucking with Rittz, you’re not top of the line’. Burn City, get in the firing line of one of ATL’s hottest rappers!

With a flow like no other, Rittz peels off rounds like a fully automatic weapon. In just six years, he has amassed a packed banana clip of tracks ready to let loose on the front lines of hip-hop’s live stage. On Friday, 26 August, in celebration of his latest album, Rittz is mounting up for a live assault at the Royal Melbourne Hotel for his Top Of The Line Tour 2016.

Rittz, the rapper who also goes by the alias of Jonny Valiant, has a rapping style that sees him transition into a beast mode not seen since another white rapper from 8 Mile had emerged. In reference to his rapping ‘top of the line’, Rittz himself explains “that when I write songs, I write to the highest standard,” he says. “When it comes to rapping and this style that I do, it’s as good as it gets.” Through each of his tracks the southern rapper lets rip, a flow that burns most emcees across a range of banging beats provided by a growing list of producers.

The Atlanta-based MC from Gwinnett County, stepped into the deep south’s firing range after the battle-tested rapper cameoed on Yelawolf’s 2010 EP track Box Chevy (off Trunk Muzik, 2010). This led to he and Yelawolf touring together on the 2012 Slumerican Tour, whereupon the MC made his bones. In October, 2013, Rittz made the cast of XXL’s inaugural cypher at the 2013 BET Hip Hop Awards, appearing alongside rappers Wax, Rapsody, Emis Killa and Jon Connor.

Rittz became widely acknowledged for his 2011 mixtape White Jesus and subsequent reworked project White Jesus: Revival (2012). Following hot off his career breakthrough, Rittz signed to Tech N9ne's Strange Music that year which has seen the releases of his studio albums thus far, starting his debut studio album The Life and Times of Jonny Valiant (2013). Yelawolf appeared on the album with guests Big K.R.I.T., Mike Posner, Suga Free, Tech N9ne and Krizz Kaliko. Follow-up, Next to Nothing (2014), featured Yelawolf, Twista, Trae tha Truth, B.o.B., Mike Posner, Shawty Fatt and Scar over beats provided mainly by Seven, Lifted and Kato. The album was highly regarded across most critics with XXL’s Jeffrey Whaley rating the album 4 out of 5, stating that, “with this being one of the better albums of 2014, Rittz has solidified himself a spot within the rap game for years to come”.

Off the heels of his previous successful LP, Rittz dropped Top Of The Line this May harnessing the lead singles Ghost Story, Propane (featuring Devin the Dude and MJG) and Inside of the Groove (featuring E-40 and Mike Posner) with the lion’s share of production coming via the return of Strange Music’s Seven alongside Matic Lee, Heartbeatz, Kato and more. The album hit second on the Independent Albums and third on its Top R&B/Hip-Hop Albums US charts.

As he prepares to tour the new album internationally, Rittz has steadily matured on the live front including appearances on SXSW tours, numerous Gathering of The Juggalos lineups and coming this August, taking over Melbourne city. Rittz, the killer white rapper, continues to let loose a lyrical onslaught on wax unparalleled across the hip-hop horizon.

Get your tickets now from Matt Van Rooy.