JPoint, Izzy and Mikoen - The next generation of SWS members
Tomorrow, Friday 3 April 2020, South West Syndicate (SWS) release their second single "The Next Chapter", since the group's reformation.

"The Next Chapter" features the next generation of SWS members who are all acclaimed heavy hitters in their own right within the hip-hop scene: Mikoen, Izzy, JPoint, DJ Black President and SAJ.

"The Next Chapter" is a tribute to the hip-hop icons who have paved the way, when local hip-hop was not accepted in Australia. In the track, Mikoen, Izzy, and JPoint pay homage to some of Sydney's hip-hop legends, "the kings and queens of Sydney's hip-hop scene" Spice, Def Wish Cast, 046, Sound Unlimited Posse, South West Syndicate.

The music video was filmed at Sydney's only Hip Hop bar and SWS host venue Hustle and Flow, which is also home to Rock the Block a weekly hip-hop event run by Izzy and supported by Nigel Tarrant, owner of Hustle and Flow. 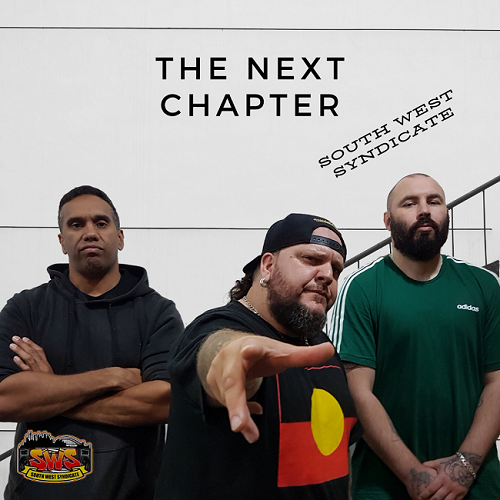 The Next Chapter video will premiere online on Saturday night 4th April at 9pm 2020, as part of the 4E programming for the 4Elements Festival running digitally from 4th August to 5th December. Hosted by the effervescent Jess Paraha. (Link to stream available on the SWS Facebook event page)

As a posse, South West Syndicate (SWS) have been making music for more than 35 years, starting as youths in Bankstown and Redfern. After achieving success and breaking new ground for underground hip-hop in the '80s, '90s and 2000's, the group parted ways in 2003 to work on their individual careers. In 2019 the original SWS crew Munkimuk, Naz and Brothablack reunited and pulled a dream team of South West Sydney rappers and merged metal and rap for the release their first single ain August 2019, "Back like a Boomerang."

After 12 months of the 10 people crew working on new music in the studio, SWS are ready to release the singles off their upcoming album, also named, "The Next Chapter".

In addition to the new songs, SWS recently released a music clip of a 1996 retro track, "Just Another Day" filmed in Bankstown. This will be part of an SWS retro album, including their signature SWS song "Are you with me out there?"

Watch the full video for "Just Another Day" here. It will be available on streaming services on 7th August 2020.  Pre-Save on spotify here!

Listen to The Next Chapter Here