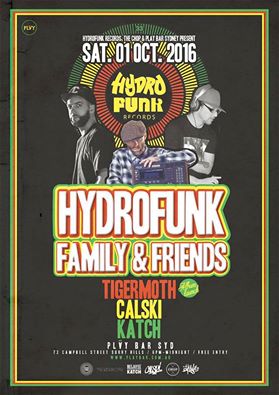 Hydro Funk Records is coming to Sin City for one night with a showcase of Live music from the next generation of Hydrofunk Artists gracing us on the night are Tigermoth (Album Launch), Calski, Katch with guest Benny Hinn.

September & October will see Hydrofunk hitting the East Coast of Australia for a series of nights, with new music from the label. Hitting the road will be...

***TIGERMOTH***
With his Album Launch on the night our main man was born in the year of the Tiger, Tigermoth’s (aka Tim Patterson) Beats Take you on on an aural journey. A multi instrumentalist who chooses to express himself using turntables, samplers and FX while his film background and Jazz learning’s allow him to compose sets that tell a story. Tigermoth will be previewing and promoting music from His up and coming Album Effort & Essence…

Somewhere in the musical ether that connects arrays of genres, you'll find Tigermoth floating through sounds, and feeding off different eras. A healthy dose of Electric Jazz, Boom Bap, psychadelica, world music, and LA beats, make up his musical diet.

Born in the Chinese year of the Tiger, Tigermoth's (a.k.a. TiM Paterson) beats take you on an aural journey. He is a multi instrumentalist who chooses to express himself using turntables, samplers and FX. His intelligent mixing attests his abstract turntabilism, while his film background and jazz leanings allow him to compose sets that tell a story.

A prolific producer, Tigermoth has multiple solo releases, and is in high demand for his remix and soundtrack work. He has recorded, performed with and supported a vast array of artists including DJ Krush, MF DOOM, Jon Wayne, Guilty Simpson, Phat Kat, Del the Funky Homosapien, Oh No, Kool Keith, EL-P, De La Soul, The Opus, Gaslamp Killer, and Cut Chemist.

***CALSKI***
Calski who has just dropped his Folkus EP accompanied by a 7’ vinyl feat Hau on a funky party banger Just Clap, while the B-side gets a Serving with I AM D & Briggs on 1 hand on the Bible!! Bringing his Sampler and Laptop drop some fresh heat, plus some Friends from the Folkus EP will be popping up from each state blessing the mic along side Calski.

Calski is an MC/Producer from Brisbane, QLD. Long renowned for his unmistakable production and profound lyricism, Calski has been a consistent and unmatched presence in the Hip Hop community in Australia since the early 2000's. Also a DJ and multi-instrumentalist (bass, keys and guitar), you may have heard his tracks played on Triple J’s Hip Hop show or on community radio Australia wide.

***KATCH***
Local MISFIT from the early start with Graffiti & Breaking with BBoy Allstars, finding his love for the decks back in 83.Winning QLD DMC several times and then some, years later some how managed to be the host of 4zzzs Phat Tape Hip Hop show, Local ledged & pioneer around Brisbane’s Hip Hop & club scene, creator of Hydrofunk Records and Founding member of Resin Dogs, which has taken him to audiences across Australia and the globe.

This guy knows his way around a record crate...

***BENNY HINN***
Benny Hinn (Daniel Robertson) began spinnin’ vinyl back in 01′ playing a range of phat funky house and some chunky big assed broken beats for the masses… Although now only 34, the Hinns has played at some of the finer establishments, parties and festivals around Sydney, Melbourne, Cairns, Spain, Wollongong and the South coast, gaining a rep az a bit of a party starter and one with some def skillz, finesse and sheer artistry on a pair of 1200s.

Benny has also been dipping into a little production here and there with a few little mashes and beats all up on his soundcloud & mixcloud page & is host of the Radio Program Sydney Underground on Bondi Beach Radio.

His latest venture has been building and establishing PLAY BAR SYDNEY. After drawing inspiration from his last stint in Melbourne and meeting his partner & co-owner Sarah, the two worked hard to build what they hope to be for many years to come, an institution that brings decent music into Surry Hills Sydney. He has programmed every bit of music that has come through the venue and supported a huge range of hip hop, breakbeat DJs and just awesome beat-makers and producers both local and abroad.