The D.Y.E Interview - Sorry For The Stickers 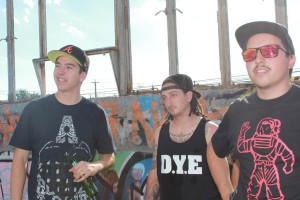 This three-piece hip hop outfit started by assaulting their hometown Melbourne by plastering its concrete jungle with D.Y.E. stickers. This was their plan of attack, reflective of the lengths this group will go to get their hip hop assault recognised among the herd. The infamy of The D.Y.E. has gone from stickers to sales of their new EP apologising for their sticker campaign.

‘Sorry For The Stickers’ is the debut EP for DJ Marshall, MHz and Slam Master D who have previously dropped two mixtapes showing their full flair and rhyming dexterity over dope party beats cutting and piecing their bars over call & response jams like Jurassic 5 or the Beastie Boys, two groups from which these lads style themselves. However it’s the live shows where these guys become creatures of the spotlight, building a rep as strong as their sticker assault through the notoriety of putting on quality live performances.

The D.Y.E. are certainly here to build on what they have started years ago, as found out in this very in-depth interview with the three piece, dissecting the new EP’s tracks and delving into the future plans for the group and discovering that, despite the efforts put forward to get their name out, they don’t take themselves too seriously. Even the acronym for their name is up for interpretation. However, The D.Y.E. believe it’s their music and live shows that will cement their names in Australian hip-hop.

Interview by Rip Nicholson on Thursday 26 June 2014
Responses from The D.Y.E.

In all that is written on your group, very little is mentioned about the origins of The D.Y.E name and the acronym itself. What can you tell me about it?

It’s what ever people want it to be, I think we have a different answer every time we get asked this question. A few of our favorites are ‘dope young energy’, ‘dinosaurs - your extinct’, ‘define your element’, ‘ditch your ego’ and ‘double your entertainment’. It can be whatever you want it to be.

What can you tell us about the DYE stickers? Is this something you guys started years ago?

In what started out as giving a few stickers to some mates for promo has grown into a full campaign to get The D.Y.E name out there. Sticker promo probably started 18 months ago. We’ve offended a few people and pissed a few ‘fun police’ off, so that’s how we came up with the name. For the record, if we could afford billboard, TV and radio ads to promote The D.Y.E, we would. Seeing as we can’t we invented our own way of ‘affordable’ advertising.

These things have got us banned from multiple venues in Melbourne and even in trouble with a few graff crews, luckily we sorted that shit out in the only way we know - with a beer and a bit of a smoke.

Plus it’s just fun trying to get them on law enforcement, bouncers and any unsuspecting patron at a pub we've been to. Also, sorry to anyone that has had to clean them up or had one stuck on their car. Hit us up for some free stickers and CDs at our website, {D.Y.E.]

Did each of you come from a hip-hop background? Or are their other distinct influences shaping your music?

Marshall is an old punk drummer and MHZ used to rock bass for a funk band. Slam Master D used to be the front man for a pub cover band. We always listened to hip hop and thought it would be a lot of fun to give it a crack.

Our first tracks were recorded on a six track tape recorder from real instruments, MHZ would play drums out of time and then Slam would put down a sloppy bassline and then start recording into a rusty old Shure that we traded for a slab and a joint from a guy at our high school.

What are the main influences that go into the creativity of a DYE track? or, in other words, what do you hope that your fans/listeners take away from your art?

We try to make something that is fun and that we would want to play live or listen to live. It needs to have energy and be interesting to listen to. We try to stay away from the typical, “16 - chorus - 16 - chorus” kind of vibe. We like to keep it interesting with variation in cutting and vocal change ups. Hopefully it’s something the crowd can party to, something you can drive to or something you can chill and smoke to (not at the same time though cos that is dangerous (but it is also fun))

Is it important for you guys to stand out from the rest, to bring a point of difference to your act?

We don’t take ourselves too seriously. What sticks out for us is our energy and passion for performing and entertaining. We try to write tracks we would want to play. Our shows are where we are in our prime and our style comes to the fore. 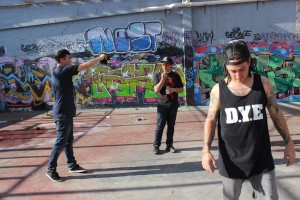 Mo does a beautiful job on the hook for your ‘Lighters in the Sky’ track. The struggle to get a gig and be noticed in the indie hip-hop scene is hard these days. How do you guys see yourselves out of this and getting your EP, getting Obese on distro and inevitably getting gigs? Do you have any advice for artists struggling behind you?

Mo does an awesome job on that. We sent her the track and about a week later she came back with the hook. It blended in well with the beat and we also had a fun time making the video for the track.

Hassle, hassle, hassle. Email, phone call, walk into offices and walk into stores. Follow up with some more hassling. We are still doing emailing and calling everyday trying to find new leads and opportunities. We get knocked back all the time but it is a matter of maintaining the pressure and keeping our eyes on the bigger picture. We’re stoked to release this EP through Obese Distribution. They told us our stuff wasn't up to scratch a few times before this happened but we kept at it and the EP is now released!

In terms of advice for other crews, steer clear of these cats that are out to take cash off you in return for jack shit, and dodgy venues that will do you over! There are some places in Melbourne that need to have a good look at themselves and what they do to artists. Support local hip hop.

We couldn't get a single gig so we started our own production company ‘Street Credit Productions’. We just did anything we could to get shows. Book and organise gigs yourself it’s the best way to learn about the industry.

I’m guessing one piece of advice follows on ‘No Matter the Weather’ where you guys show a willingness to perform at any time, any where, rain or shine. What has been the most difficult or most enduring gig you guys have gone through?

All gigs are fun man. They all have there little ups and downs. Sometimes the sound guy doesn't show up, support acts don't show or there isn't enough equipment or cables. Other times DJ Marshall is too high and forgets how to DJ. Along the way we have seen fights in Sydney, dudes getting aggro over money and had the PA catch fire at Push Over festival last year. We've had gigs where the 3 of us were sharing one mic because all the mic’s in the venue stopped working. Even if you’re on a street corner with two people watching, you need to put on a show. We've played some really small shows but we always maintain the same purpose and intensity as if it was a packed house.

One gig nearly got cancelled because dudes were blazing joints inside. The cops came and nearly shut the venue down. Luckily one of the boys knew one of the cops so we got to play and blaze on stage. Cracking night!

‘Front To The back’ has DJ Marshall going all out on this one. Awesome cutting. Definitely my favourite track from the EP. On this track you said, ‘these days we play to evade these ways’ referring to avoiding being swept up in crime and the street life. If you guys weren’t DYE the rap act, what do you think fate would deal you guys in the big world?

Yeah DJ Marshall definitely let rip on this one, sampling a wide range of material. Haha, we actually say, ‘these days we blaze to evade these ways’, referring to blazing up and chilling out.

If SMD didn’t do hip hop he’d spend the time in the gym looking at his haircut in the mirror and Marshall would be listening to Bullet for my Valentine while combing his fringe.

What part of the process do you guys enjoy the most, writing raps, creating the beats, recording in the studio or performing for a live show?

That depends on which one of us you talk to, SMD loves the whole writing process and the lab sessions we have. They can be a 12 hour session of writing, recording and drinking just getting it done. we have skate breaks, food breaks but just keep writing. But then, the gigs are the real shit. Getting there setting up sound check partying scoping out other groups then just attacking the stage, the crowd, no holds barred.

Where do you envision DYE going in the next few years? Staying together as DYE, taking on solo and other collab projects?

Hopefully playing some bigger shows and supporting some quality artists. We are keen to get back in the lab and to start recording again. Also hitting the stage and getting a few more shows organised is high on the agenda. We have our EP Launch at Highlander Bar on Friday 1st August, as well as shows at The Espy and The Evelyn coming up. Into the future, some more collabs would be sweet because it’s fun experimenting with and learning from other people who like making tunes too.

Thanks for having us! Peace.