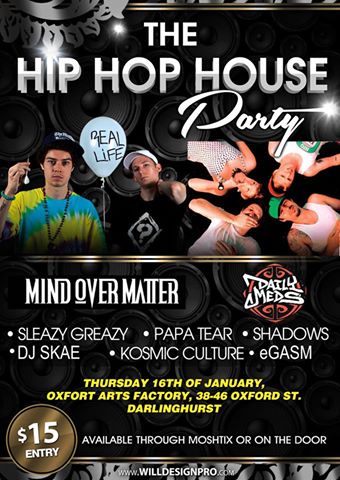 The Hip Hop House Party, set to be the newest and best live hip hop night in Sydney, showcasing some of our city’s dopest rappers, best beats and livest acts, the night promises to get a drink in your hand and a shake in your booty every month.

The House Party is kicking off on Thursday the 16th of January and starting off strong with a line up that boasts some of Sydney’s freshest and favourite emcees supported by some awesome up-coming talent.

This month’s line up includes:

Mind Over Matter who’ve been hitting sold out venues in a multitude of locations across the country Mind Over Matter have proved themselves to be one of the most highly charismatic, energetic, and creative live acts this country has to offer. Recently the Sydney duo have released a brand new track entitled “Real Talk” set to be a 2013/ 14 summer anthem.

The Daily Meds, a Sydney favourite deliver a live show not to be missed; Daily Meds have a stage presence and energy
matched by few, and along with their Big Village label-mates will continue to earn recognition and respect as the future of Sydney hip hop.

Sleazy Greazy, with hilarious punch lines, incredible story telling and clever rhymes, Sleazy Greazy is set to be one of Sydney’s favourite rappers. Fresh from his first release “The Late Tape” Sleazy Greazy has perfected his style and delivers an awesome live act set to get you laughing and your head nodding.

For more info and to keep up to date on the event click here.