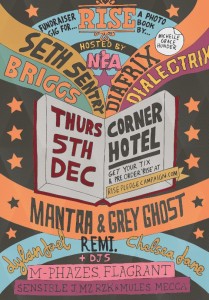 Australian Hip-Hop artists from across the country are coming together on Thursday 5th of December to stand behind Melbourne photographer Michelle Grace Hunder in an unprecedented show of support for her upcoming photo book RISE. A completely independent, self funded project, Michelle has started a Pozible campaign in an effort to raise money for the initial production costs of her book.

Part of Michelle's RISE pledge campaign is this one-time event at The Corner Hotel in Melbourne featuring an all star cast of live performers. All performers on the night will be performing shorter action packed sets to keep body's movin' in a disorderly fashion with live visuals throughout the night featuring many of the images that will be found in the pages of RISE.
Pledges can go to risepledgecampaign.com to get their tickets or pledge a bit more to pre-order their copy of RISE which is scheduled for release in the 1st quarter of 2014. All proceeds from tickets sold go into funding RISE.