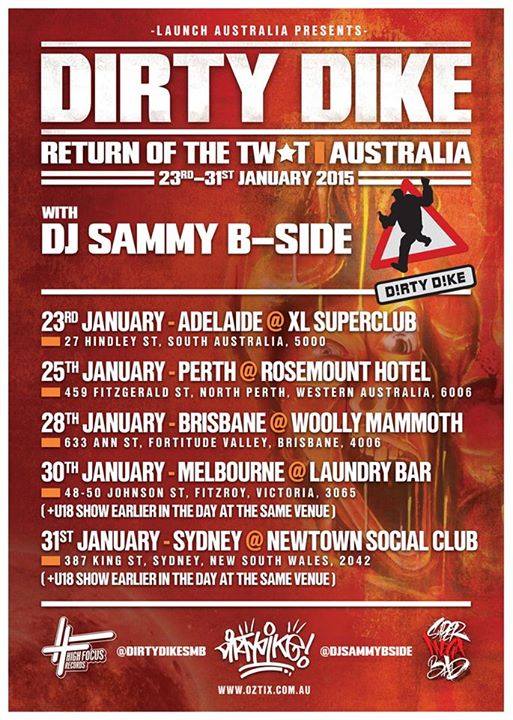 Launch Australia has just announced the Dirty Dike Return Of The Twat Tour 2015, featuring DJ Sammy B-Side this tour is set to kick off in January. He will be doing all the fan favourites along with a couple new tracks.

Catch him on a peaceful one and he will most likely be sucking on king prawns in the moonlight and throwing their discarded pink tails to Cretian street hounds. Catch him on a mental one and he will be seventeen quaddy voddys deep slurring freestyles in a pair of rusty Pelle Pelle boxers and an odd pair of his girlfriends socks to Cambridge University students

It really is all or nothing when it comes to the one they call Mr Dikestar; he never has been one for half measures in either his booze drink selection or music making. In an age where everyone thinks they can rap, Dike’s dedication to this thing called hip hop is as driven and focused as you will ever see from anyone daring to call themselves a lyricist.

Either spouting the type of filth that is completely unimaginable to the average human brain or confronting the life demons that have made him the person he is today, Dirty Dike has galvanised a significant following across the globe with the diverse seesawing he cultivates between these two distinct, yet equally potent sides to his music making. It is this inspired marrying between the two aforementioned sides that has made his music so in-demand and celebrated. Both sides of Dike shine on each and every album he has ever championed and the power struggle between the two continues to flourish in all his future album plans.

Dirty Dike first rose to prominence with his acclaimed debut solo album ‘Bogies and Alcohol’. This was way back 2008. Aggressive expansion saw Dike later join forces with Jam Baxter, Ronnie Bosh, Mr Key and Edward Scissortongue to form the much heralded hip hop super outfit Contact Play whose debut release ‘Champion Fraff’ was swiftly hailed as one of the most exciting releases that the UK Hip Hop scene had witnessed in years. The success of Champion Fraff, plus the potent addition of solo sophomore follow up ‘Constant Dikestar’ and most recently the gloriously received ‘Sloshpot EP’ to his catalog of releases, has seen Dike grow from a rambunctious twenty-something into one of the most talked about emcees in the game.

You can now find him either in Melonskin studios beating the f$%k into his MPC, neck deep in records at one of Brighton’s many vinyl emporiums or literally flying up the motorways and down the train tracks of the UK, or jumping on a jet or two overseas delivering one of the rowdiest shows on the circuit to sold-out venues everywhere.