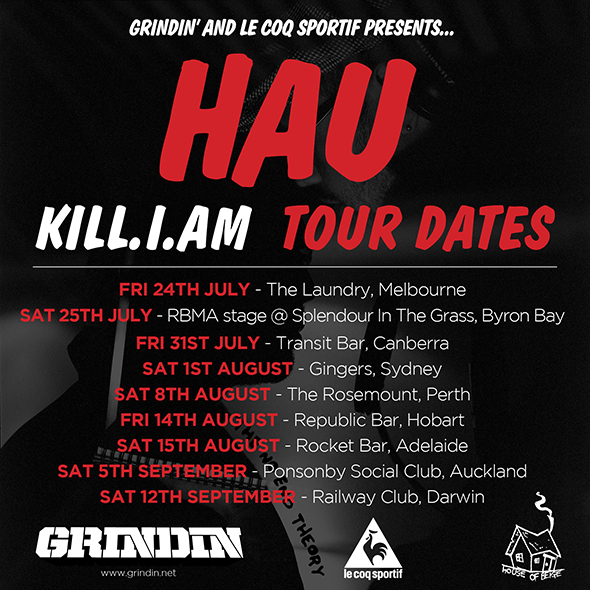 Hau Kill I Am Tour Flyer[/caption]

With 20 years of writing and performing under his belt (best known as the front man for ARIA award-winning duo, Koolism), Hau hits the road across Australian and New Zealand to promote the first single “KILL.I.AM” taken off his forthcoming debut solo album “The No End Theory”.

No stranger to the airwaves, Hau’s prolific career has already seen him provide vocals for huge talents including The Hilltop Hoods, Hermitude, Rodney P and Oddisee, head up the Hip-Hop show on Australia’s leading youth network triple j and launch his solo career with the release of mixtape “Football, Feasts & Funerals” in 2014.

“KILL.I.AM” is inspired by the frontman of a certain multi-platinum selling quartet, and in a sense, his progression from an underground hip-hop head to a mega popstar. Would you dance with the devil in order to experience the taste of success? This is what Hau asks through lyrics delivered in an effortless, laid-back flow.

The soundscape is created by the talented Sensible J & Dutch (Remi). The Melbourne producers create the bump through a mix of live drums, synths and a cleverly reshaped sample. From the grit of the bassline to the crispiness of the clicks, “KILL.I.AM” has an undeniable groove that will make both your body and mind dance.

Hau was born in Australia to Tongan parents, which gave him access to two cultures to draw from for both writing lyrics and performing on stage. His heritage plays an important part of who is as a person and as an artist. Original by name, original by style.