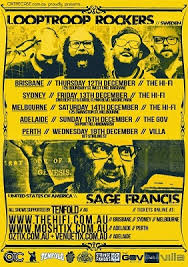 On the Case, a newly-formed record and touring company, and Anthony Devine has announced the lineup for their first international tour schedule. Swedish hip-hop royalty Looptroop Rockers will arrive in December for their first ever Australian tour, immediately after their successful American tour, which included shows at the United States largest hip-hop festival, Rock the Bells. The Looptroop Rockers will be accompanied by the popular forefather of indie hip-hop, Sage Francis (USA), as well as local hip-hop outfit, Tenfold (AUS).

The December tour will begin on Thursday the 12th in Brisbane, move to Sydney on the 13th, and Melbourne on the 14th through respective The Hi-Fi venues. From Melbourne, the tour will continue to Adelaide on the 15th at The Gov, and finally Perth on the 18th at Villa Nightclub. All shows are being promoted actively to any and all fans of music, regardless of their genre preference. The tour promises to be an energetic introduction to the live capabilities of such well renowned, and globally recognized acts on their first Australian outing.

Looptroop Rockers have been living their dream for over a decade. The group was formed two decades ago, but they’ve been supporting themselves solely through music since around ‘98 when they formed their label David vs Goliath. What’s the secret to their longevity and constancy? How have they been able to transcend the Swedish and the international hiphop scenes, thus avoiding the ups and downs of them? How have they created their own niche from where they’ve reached people through the constant media bombardment?

First of all it’s taken a strong work ethic made possible through the conviction that your business is your pleasure, and that the two perhaps shouldn’t be separated. And that as a tight knit group, believing in and loving each other; no stumbling block can stop you – only make you stronger. With that strength comes the independence that makes you realize your worth and not sell yourself short in the cut throat music industry. And with maturity comes the humbleness that makes you realize your limitations – and search for good partners and strong bonds in that same industry. It’s been important to find and sometimes create an infrastructure to reach out with the music, which in Looptroop’s case has meant being on the road for the majority of their career. Through the social sacrifices that have been the result of that lifestyle they have still never lost the ability to dream.

Embee embodies the world famous Nordic melancholy like no other producer, and his unique music has become one of the trademarks that have set them aside from other acts. His hard hitting beats, laced with deeply reflective melodies create an enchanting universe for the listener to explore. Lyrically, they’ve rarely wanted to waste people’s precious time with nonsense rhymes – and the messages, of politics, independence, love, life and death; have appealed to people all over the world; from South Africa to Chile, Australia to Poland and from the US back to Sweden. With an incredible ability to recreate themselves, fans sometimes fear what will come next – but the Troop has always needed that constant evolution not to stagnate or get tired of themselves. So what’s new this time?
Cosmic is back in the group again! Joining Embee, Promoe and Supreme; he spits on ‘Late Nights Early Mornings’:
“I felt that I needed a pause, a good thing though – now I breathe with full force!”

And this, their fifth album, is definitely a reunion of epic proportions. It’s already been coined their best album so far, and every single track on the album is indeed a certified classic. Recording in Embee’s new studio in the Svenska Grammofonstudion complex in Gothenburg, the group has been experimenting with new ways of creating songs. Already known to the public is the track ‘On Repeat’, recorded the day after 5% of the Swedish people voted a racist party in to parliament. Embee started sampling the sound of doors shutting, and made the whole beat out of different door sounds – symbolizing the politics of shutting people out. In the meantime the three rappers were recording vocal ideas that formed the foundation for the hook and the verses. That’s just one example of how they’ve really been making this album as a collective, and you can tell that the guideline has been to push the boundaries in the studio even further than we’re used to with Looptroop.

The guests this time are Chords, Gnucci Banana and Lisa Ekdahl, each blessing the album with their different kind of magic. Gnucci is featured on the track ‘Do’, which is all about less talking and more action. And with the new album dropping in early March, there’s a lot of action in the form of touring lined up from spring, through summer and fall – all the way to winter. Ending this off with a quote from ‘Do’, well worthy of a professional dreamer – the Rockers invite you to take part in the experience: “Ain’t no question what we gon’ do, conquer the world in a week or two. I’m through talking, too much foolishness – Looptroop Rockers, let’s do this shit!”

Sage Francis is widely considered one of our generation's greatest lyricists. His gifted wordplay creates vivid narratives to instigate as well as inspire, but since it often derives from an accumulation of public disdain and personal turmoil, it's made abundantly clear that there's no throne to watch here. Dubbed as the "forefather of indie-hop," Francis originally earned acclaim in the early 2000's by winning the most highly coveted titles of the emcee battle circuit. With little to no funding, Francis sustained himself by selling his innovative “Sick of” mixtapes, all made by hand on the floor of his Providence, RI apartment. These were essentially bootleg compilations full of select recordings from his 12” vinyl singles, demo sessions, live performances and radio freestyles. The popularity of these tapes birthed Strange Famous Records (SFR); a meager, one-man operation in 1999.

Despite having no official distribution, Francis' unique brand of music spread like wildfire via the advent of file sharing networks. This resulted in him attaining a massive cult-like following around the world, creating a demand for his albums which was too high for him to accommodate all on his own. The bigger labels took note and stepped in to join the ride. With his first studio album, Personal Journals (2002,) Francis daringly set aside the more boastful side of rap by catering to his poetic leanings and scathing socio-political commentary.

By 2005 Sage Francis was the first hip-hop artist signed to Epitaph Records and soon became one of the highest selling independent artists of his genre. Rather than abandon his day-to-day grind at SFR, he channeled all of his newfound resources into it, allowing the label to expand in staff as well as roster. This was yet another risky move considering how other indies of the sort were jumping ship thanks to the music industry imploded on itself around that time. Now in 2013, with all contractual obligations fulfilled, Sage Francis is finally back home at SFR and gearing up to defeat the odds once more. Storming the castle while others watch the throne.

Having spent many years recording and performing as accomplished solo artists, Swanny and Kinetic (aka. K1) combined forces in 2008 to form Tenfold. Hailing from the urban utopia of Frankston, thirty minutes drive south of Melbourne, Tenfold have since become widely renowned for their powerful live Hip-Hop performances and unique sound, both of which connect with audiences on many levels.

In 2010, Tenfold released their debut Ep Deluxe Edition with DJ Aztek under their independent label – On The Case Recordz. Without a distribution deal, the first thousand hard copies were quickly sold via live shows and street sales and, following this, digital downloads became something of an epidemic. The Deluxe Edition EP was widely praised as possibly the best Australian Hip-Hop release of the year, complimented further by Beat Magazine in their review which noted that Tenfold were ‘Australia’s finest ghetto poets'. Tenfold have thus far supported notable artists such as Bliss n’ Eso, 360, Phrase, Muph & Plutonic, Bias B, Diafrix, and Akil (of Jurassic 5 fame).

In recent years, Tenfold have been avoiding the spotlight to focus intensely on their upcoming LP Newclear. With a track list appropriately diverse in sound and substance, Newclear displays lyrical brilliance (exploring philosophical questions on both a grand and personal scale), and features production from Poker Beats, DJ Gutz, Skitzo Beats, and DJ Rellik. As such, Tenfold have created something of a monster that stands alone in its genre – The album is set for release in early 2014 via On the Case Recordz.

With an uncompromising approach to all aspects of their art, Tenfold seem well-prepared to make a significant impact on the Australian Hip-Hop arena with their upcoming projects, powerful live performances, and developed yet unique sound. Tenfold is certainly an act not to be missed, and will leave audiences wanting more.