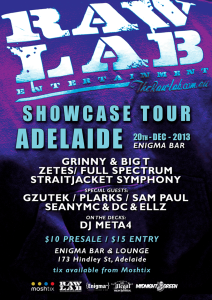 What started nearly a decade ago as a loose collective of hip hop artists, Rawlab Entertainment has now matured into an independent, multi-faceted, fertile and driven record label.
Rawlab has spent the last 12 months building a family of artists and are finally ready to unleash them on the rest of the country.

Beginning in Adelaide and Melbourne, with a NSW show to be announced shortly, Rawlab’s artists will be showcasing their latest and classic tracks on stage alongside local supports and special guests.The Enigma Bar in Adelaide plays host to the Rawlab Crew on 20th December 2013, with supports from Plarks and Sam Paul, and special guest Gzutek (Vic).

Melbourne’s Home of Hip Hop, The Laundry, will do the same on 11th January 2014 with very special guests Gzutek, R.E.A.L Music and special guest Mitus (NSW).The line up is headed by Rawlab chiefs Grinny and Big T, who are joined by the majority of the family, Primary Source (Aorta and Louis Vive), Zetes, Straitjacket Symphony (Rorshak and Skandal) and newest signing Full Spectrum. Come celebrate the launch of the latest force in Australian Hip Hop, round out the year and bring in the new with a bang.