Since releasing ‘Hard to Kill’ in 2007, a loyal following eagerly anticipated his next release. An extended hiatus didn’t tarnish Vents’ standing with hip hop fans; in fact it fed the anticipation. ‘Marked for Death’ served as the big brother to his debut release, with a more mature, introspective, sometimes cynical but always honest view of the world, that is both unique and entirely relatable.

In 2011 ‘MARKED FOR DEATH’ proved to be the follow up everyone was waiting for. The lead single ‘HISTORY OF THE WORLD’ was a scathing review of corporate greed. The follow up single ‘ROLLIN BALLS’ was an underground hit and the accompanying video has over 385,000 views on YouTube.

Vents is currently working on his 3rd album which will see the light of day very soon.

The restless mind behind the ‘If the City Had A Voice’ mixtape series, Purpose defied the odds in 2013 by landing on the ARIA Album Charts for his debut 'Where It Starts’, topping the MGM distribution chart before it’s release – all without a record deal. This album delivered his biggest hit both as a performer & as a producer, a top 10 highest played song on national radio rotation. This allowed him to embark on a 40-date tour, further solidifying his following.

Although a celebrated song-writer, producer & performer, Purpose continues to represent Australia at the biggest landmark international emceeing battles in the world (OZ, USA, Canada & UK). With a chest full of medals and a hard-drive full of new music, he is looking forward to his biggest year yet in 2016 which will see the release of his second album “Make Yourself At Home”.

Claz has steadily been releasing music since 2010, released in 2012 the excellent ‘Living in the Meantime EP’. Claz has supported Briggs, Mata & Must, Remi & Hau, Maundz, Oddisee and has most recently released the mixtape '7th Floor Blues' on February 29th, celebrating the balance between space and time and is available now at -http://claz.bandcamp.com/.

Quillmore are an up and coming Adelaide Hip Hop group consisting of two emcees, Gilly n Chocka-Block with DJ Luter back them up on the 1’s & 2’s creating original Hip Hop with a nostalgic Golden Era boom bap vibe. Quillmore have supported Anecdote, La Coka Nostra, Mobb Deep, Onyx and have released their Demo with their single ‘G-Down’ and accompanying film clip.

DJ Sanchez + Lotek1200 are the resident DJ’s on The Lesson on Fresh 927. Catch them every Tuesday night from 10pm – Midnight on Fresh 927 dropping a mixture of brand new, classic and rare golden era hip hop jems along with interview’s and performances with a who’s who of International and Australian hip hop artists. 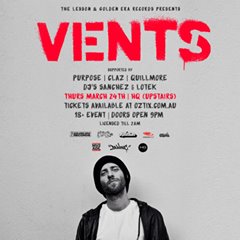