Be the first to review this product
Special Price $10.00 Regular Price $15.00
In stock
SKU
CLKCD01
Add to Wish List Add to Compare 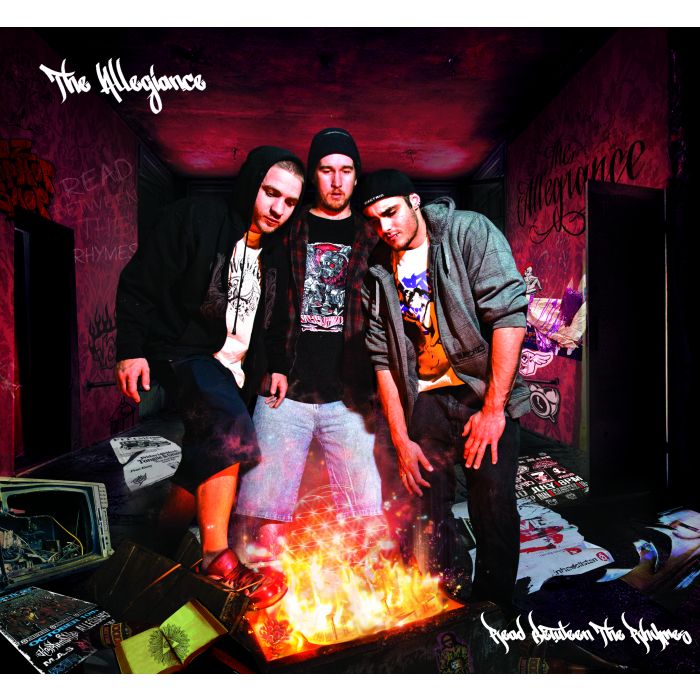 “Steppin' wet from the River City, the VC massive present The Allegiance. The group’s two MCs Coops and Biotic are ready to mount their assault on their forthcoming debut LP Read Between the Rhymes.”

Both MCs went the same route, sharpening their skill-set on the open mic circuit. Underground hip hop club, The Source on Ann Street gave way to Biotic venomously rhyme-spitting on victims in 2003 and taking out the Babbleon Battles on Australia Day 2006. Other half, Coops has always put his mind to rhyme, tired of commercial over-play on mainstream radio, he began penning his own lyrics over tempered beats, which proved just the creative stimulant to awaken his talents. By early 2006 his first open mic sesh came by way of Brisbane's Afrika Pacifika Festival hosted by Airlock Studios where he won the chance to record his track 'Underground Hound'. Coops received good airplay through Triple J's Unearthed competition and this put the pin on the map for charting the course of his career.

Both rappers bumped heads circling the underground scene, before joining forces in 2007 on the single 'Power Trippin Bouncers' which developed into the forming of The Allegiance. Not long after, they featured on The First Downplayment record from Downplay Records and the City Cyphaz Mixtape in early '09 barging through the speakers with some of Queensland's freshest rap recruits. Months on the grind hustling live sets up and down the Sunshine State, The Allegiance began buffing up their rep at NurchaFest Brisbane, the Qld Rollerblading Titles at Morayfield, the Brisbane leg of Heatwave supporting the likes of D12 and Tech 9, supporting Muph & Plutonic on the Gold Coast for Hip Hop Wars, as well as supports for Kerser, Simplex, the list goes on.

The Allegiance embodies the makeup of every Australian hip hop artist, striving with heart and soul to make the most honest music they can muster up. Keeping their game on the grind, both Coops and Biotic have been heads-down over the last three years doing just that. The Allegiance can be heard on Reverbnation.com and live and loud on the Brisbane scene. Read Between the Rhymes is due out before the end of year at all good purveyors and stockists of solid Oz hip hop.

“THE ALLEGIANCE HAVE STRUCK A BALANCE BETWEEN THE POLITICAL AND THE PERSONAL IN THIS; THEIR OPENING RHYME BOOK READ BETWEEN THE RHYMES. IT’S APPARENT THAT BRISBANE’S FRESHEST TRIO ARE HERE TO BE HEARD AND NOT PART OF THE HERD.”

The Allegiance have sourced the sounds behind their rhymes from both local and abroad with producers Ghosty, Mr Brown, Skinz Mark and internationals Contagious and Blunted Sultan. Both MCs are always on the hunt for quality beats in which they can sink their teeth into and over 17-tracks the diversity shows, with the soundscape ranging from a stripped backdrop to a flourishing melange to best describe the stories of these Brisbane MCs. Read Between The Rhymes is as much a tour guide through their struggles as independent MCs as it is a simple narrative about life on weekends, making it home and all the dramas in between. It’s honest and blue collar, as they put it; ‘no frills like Franklins’ - purely what The Allegiance is about.

The introduction paints a pulsating inner-city apocalypse as Coops and Biotic bolt out of the gate with furious gusto on the piano-looped banger ‘Pledge Your Allegiance’ by Mizari showing a real fight for hip hop and their place within it. “I like my flows to be punchy and direct. You could have the tightest flow going round but if you’re lacking in delivery it won’t have anywhere near the same effect,” muses Biotic. “Mic control is very important if you want to capture your audience’s attention. You gotta spit that ish like ya mean it!” With this, the tone is set for their debut LP by which both MCs celebrate the spot they’ve earned themselves over years of hard grafting. “We certainly have always fought for the right to rap our way,” declares Coops. “A common theme in a lot of our tracks is about taking the next step, which can be perceived as us challenging other MCs when really i think it’s just us challenging ourselves, telling ourselves to do it right, because if you want to be taken seriously you have to be the real deal out there on the stage living it and doing it. It’s been six years for us so I feel we've earned the right to have our say and be heard.”

Global politics are broached on this LP where The Allegiance offer an alternate way of looking at issues that affect us all with ‘Outside The Box’ produced by Contagious (US). “There's a difference between being ignorant and believing everything you're taught or spoon fed from birth and having a fully informed opinion based on all the evidence,” informs Coops. “If something just doesn't add up then I like to ask questions and we both use that methodology towards certain tracks on the album. That's why underground hip hop is so cool because it’s uncensored and real. There's something for everybody but you have to go looking for it otherwise you only get exposed to the flavour of the month that they feed you whenever you click that button.”

Read Between The Rhymes takes the pair as far back as their burgeoning careers in the open mic circuit. After jumping into each other’s solo shows they decided to band together which resulted in recording tracks ‘Reflections’ and ‘Power Trippin Bouncers’ played live numerously over the years and widely recognised through Boomtown’s live indie scene. Adding these tracks plot the early stages of how far they’ve come with this album - reproduced for the LP with beats provided by locals Ghosty and Redshirt respectively. Both MCs are held in pause on ‘Streetlights Not the Stars’ as they reflect back on themselves struggling between their art and aspirations. The soul-piping tones of Aria nominee Jen Cloher serenade the hook between the melancholic noddings of US beatsmith Blunted Sultan (aka Vice Versa) who also provides on the ‘Modern Day Tragedy’ fable borrowing from Cat Stevens’ ‘Cats In The Cradle’.

During the course of their journey, listeners are taken back to the lair to meet the Velvet Couch massive as Coops and Biotic throw down the ’VC Knights’ joints - both posse cuts with the whole family -Fundamental Elements, Sneaky-T, PJ, Ahrensy and the Doobalicious one. ‘VC Knights 2’ harbours a threatening heavy metal affair of hardcore chopping beat production from Skinz Mark of Kryptamistik.
The album is held very close to the ground with tracks ‘Seedy Sundays’ and ‘Sorry Mr Cab Man’ hitting home to the hearts of fans who tribulate the same weekend trials. “We've all woken up the day after a big night and asked ourselves, ‘what the fuck happened last night?. These tracks are as much about telling a story as they are about telling people who we are. People can see through the bullshit. With us, it’s what you see is what you get.”

Representing the Velvet Couch massive, The Allegiance have served up one of Boomtown’s hardest hitting albums in recent memory. Read Between The Rhymes scores the value of information hidden in what you don’t read in society, questioning the status quo as we know. It tells tales of good times and getting home in one piece, all the while harnessing a true and a hard-working ethos and coming together with wide production and such lyrical enthusiasm inside a book of rhymes that proves to be a real page turner. Read Between The Rhymes shows all that these storied MCs are about and promises to be just the first chapter for The Allegiance.

“The album is bound together nicely by all of the social and political commentary. We keep an even variety and balance between fun and fact. Our style has always been fresh and realistic. We stick to the facts without getting lost in the politics. We build ‘em up just to break ‘em down.
-Biotic

Reviews
Write Your Own Review
Only registered users can write reviews. Please Sign in or create an account
Related Products
Compare Products
Compare
Clear All
You have no items to compare.